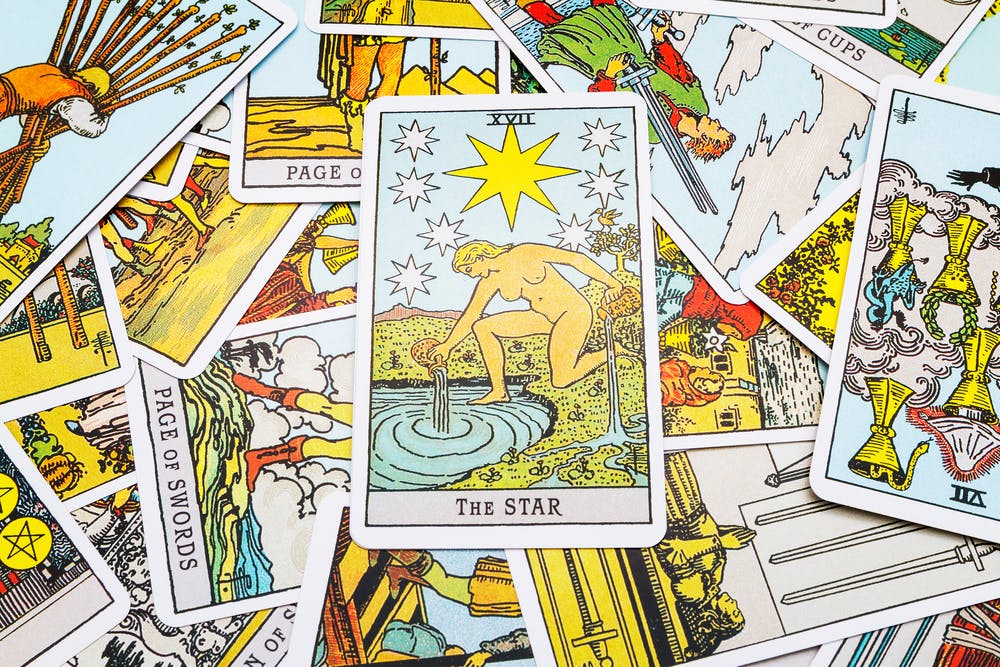 Tarot cards are arguably the most popular form of divination in the modern Pagan world, and many tarot card names can be gleaned from them.

Tarot cards were invented in medieval Italy as a regular deck of playing cards. It’s probably not surprising then that the original iconography was a lot more Catholic than it is today. They didn’t really become associated with mysticism or the occult until the 1700s. The Major Arcana has 22 cards and was originally called the trump cards because they were used for gambling. The Minor Arcana looks a lot more like a regular deck of playing cards except instead of clubs, diamonds, hearts, and spades there’s cups, wands, pentacles, and swords. Each card has a pictogram that represents a certain concept.

It is a myth that Pagans use tarot cards to “see the future” in a literal sense. Most people who give readings will tell you that tarot cards show you the forces at work in your life and help you see what your next steps should be.

When it comes to tarot card names, let’s focus the Major Arcana.

It is actually hard to find a name that goes with this card, but some people associate it with the god Hermes. The Magician shows a man with a small table that has the four symbols of the Minor Arcana placed on it. This card represents practicality, initiative, and creativity.

The card now called The High Priestess was originally known as The Popess. This could be in reference to the legendary Pope Joan who allegedly became Pope while disguised as a man. The High Priestess is associated with secrets, mystery, and powerful feminine forces.

The card known as The Empress may allude to Empress Adelaide, who was beatified by the Catholic Church. This card represents fertility, desire, and beauty.

Historically not connected to any one person like the last two, but all the original cards clearly refer to the Holy Roman Emperor. The first Holy Roman Emperor was Charlemagne, or Charles the Great. This card is associated with tradition, control, and powerful masculine forces.

This card is also known as “The High Priest,” “The Pope,” or “Jupiter.” The Hierophant represents knowledge, respect, and social convention.

Tarot cards were originally Catholic, so the two lovers are widely considered to be Adam and Eve. The Lovers represent romance, passion, choice, and temptation.

One of the most complex cards in the deck, The Chariot depicts a princely warrior sitting in a chariot being pulled by either two horses or two sphinxes. Aside from bravery, this card is also associated with pride, self-confidence, recognition, and honor.

Now known as Strength, its Italian name was La Fortezza, meaning the same thing. This card is also sometimes called Fortitude, which could also work as a name. The Strength card shows either a man or a woman with a lion and represents perseverance, self-control, and kindness.

The Hermit is seen as a shamanic figure. The card traditionally shows an old man with a staff in one hand and a lantern in the other, traveling through a wasteland. A sage is a term for a very wise person, so it fits. This card represents introspection and guidance.

In the original Italian, it was known as La Rotta (“The Wheel”), and it traditionally depicts the goddess Fortuna. This card represents sudden change and opportunity.

Justice is a truly gender-neutral virtue name currently at Number 578 for girls and 598 for boys on the official US Top 1000. This card is associated with the goddess Athena/Minerva (and traditionally depicts her) and represents intellect, objectivity, and responsibility.

This card was originally known as The Traitor, and hanging by the ankle was a common form of punishment for them back then. But The Hanged Man on the card never has a look of pain on his face. Comparisons to Jesus are inevitable, but the Pagan view is that it’s Odin. The Norse god hung upside down from the world tree Yggdrasil for nine days in order to obtain wisdom. This card represents sacrifice, patience, acceptance, and new world views.

The Death card is not as ominous and literal as the movies make it out to be. This card traditionally depicts a skeleton riding a horse and represents the ending of a chapter in life. Mort could also be short for something like Mortimer.

The most obvious name in the deck. The Temperance card usually shows a person (often a woman) pouring water from one vessel to another. It represents balance, moderation, and the blending of opposites.

Diablo is the Spanish word for “devil,” and the adopted name of author and screenwriter Diablo Cody. Ironically, most Pagans don’t believe in the Devil, but the card remains. This card does not represent evil, instead, it stands for materialism, stagnation, and ignorance.

The card now known as The Tower, which depicts an apocalyptic scene of people falling from a crumbling and flaming building, was originally known as La Sagitta (“The Arrow”).  This card represents chaos, uncomfortable revelations, and ruin.

The Star card would have been known as La Stella in Italy. This card shows a woman pouring water on land and earth. It represents tranquility, hope, and goodwill.

As far as moon names go, Crescent is a less obvious choice than Luna. The Moon card represents imagination and confusion.

Solstice is an unusual and inspired sunny name for a child. The Sun card stands for happiness and enlightenment.

Tarot being a Catholic invention, this card refers to The Last Judgment. The angel Gabriel is traditionally depicted. Judgment represents rebirth and forgiveness.

In most decks, the last card in the Major Arcana is known as The World. But in some, it’s known as The Universe instead. This card traditionally represents wholeness and success.

In many Tarot decks, the Major Arcana and each suite tell a story and The Fool is the protagonist of that story. This is called “The Fool’s Journey.” The Fool is shown as a simple beggar with a dog nipping at his heels. The dog represents common sense and The Fool ignoring it represents the thirst for new experiences, clean slates, and risk.

Names from the Minor Arcana

For the Minor Arcana, we have names inspired by each suit:

Originally, each suit would have been associated with a particular social class, the Wands representing peasants and the working class. George means “farmer,” so it fits well. This suit represents nature, simplicity, and creativity.

Basically a fancy word for cup, but it suggests spirituality. The Cups stand for the clergy and represents love and emotions.

Swords are traditionally associated with Nobility and the Military. This suit represents reason.

Isadora Vega is the creator of the blog Bewitching Names, which focuses on witchy and pagan names. Her lifelong name geekitude and passion for rarities makes writing about this topic a treat. She is currently based in the Pacific Northwest.

View all of Isadora Vega's articles