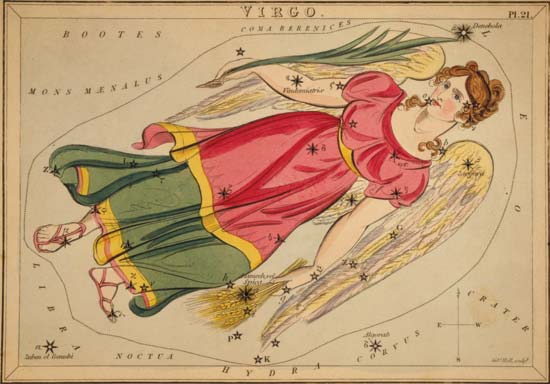 If you’re looking for baby names related to the astrological sign of Virgo, here are dozens of intriguing ideas!

Names for Virgo babies take their cues from lilies, yellow sapphires, the color gray, and the element earth. Virgo, the sign of the virgin, is the summer’s final sign. Virgo begins on August 23rd and ends September 22nd at the shifting of seasons. Virgos are even-tempered and dependable people with inner strength, which can be another source of inspiration for names for your Virgo child.

Amalthea – The unicorn is a symbol of innocence and purity; in many tales, the magical beast is only approachable by virgins. Lady Amalthea is the human name of the unicorn in classic novel The Last Unicorn. Other virginal symbols are pearls and lilies. In their original forms, Pearl and Lily are baby nameswith vintage charm. More Lily names include Liliana, Susannah, Maylis, Kielo, and Sayuri. Margaret means “pearl” as do its short forms Maisie and Margot.

Gray – Gray is the color for people of this sign; along with alternate spelling Grey, it makes a nice modern name for a Virgo child. Other options are Grayson, Floyd, and the Irish Liadan, “grey lady,” along with gray shades Ash, Flint, and Dove. The virgin’s flowers give us the names Gloria, for morning glory, and Aster, a flower meaning “star.” Sapphire, particularly yellow sapphire, is the Virgo’s gem.

Emilie – The symbolic value of the virgin suggests the modesty, humanity, and humility common to Virgos. Those born under this sign are also expected to be easygoing, reliable, and good problem solvers. The names Lyle, Warren, and Truman suggest reliability; Pablo and Manyara mean humble. For a problem-solving baby name, look to famous thinkers like Ada Lovelace, Archimedes, Gregor Mendel and Emilie du Chatelet.

Mercury – The virgin is ruled by the solar system’s hottest planet, Mercury – an interesting baby name in its own right. While Mercury is too close to the sun to support any moons, it has plenty of geological features to draw names from. Pieria, Alvin, Calypso, Palmer, Hero, Santa Maria, and Tir are just a few of these.

Safiya – While it shares a pronunciation with the immensely popular Greek name Sophia, Safiya has a separate etymology. The Arabic name is a feminine form of Safi, “pure.” Catherine, Amala, and Zaccai also mean “pure.”

Zaniah – As always, the names of the sign’s stars make unique and interesting choices. Spica is the brightest star of the Virgo constellation, and one of the brightest stars in the night sky. Other name-worthy stars in Virgo include Zavija or Alaraph, Heze, Auva, Porrima, Syrma, and Zaniah.

E. Wittig is a stay at home mom to three well-named kids and is a big fan of unconventional names. She writes novels in her spare time.

View all of Frankie's articles
ADVERTISEMENT