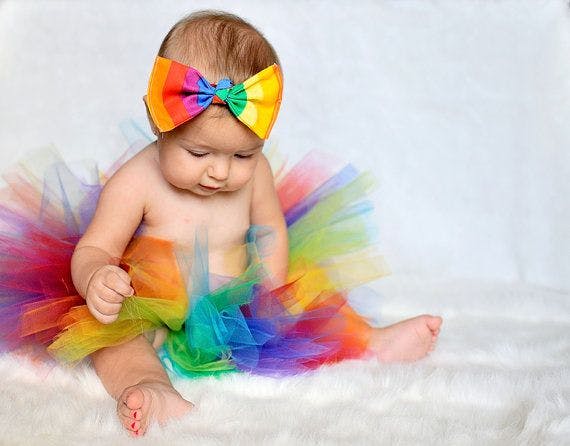 Rainbow baby names — names for a child born after the loss of another — can be a way to mark a time of mixed emotions. Some parents find it helpful and meaningful to choose a name that both acknowledges the loss and celebrates new life, commemorating the past and looking forward to the future.

“Rainbow baby” has been a widespread term since around 2008, meaning that it takes both rain and sun to make a rainbow. If this resonates with you, you’ll find plenty of iridescent name ideas here. And if not? We cover other meaningful options too.

But first, story time: I was a rainbow baby. My parents didn’t choose my name with the rainbow symbol in mind, but my mother tells me she later realized it could be interpreted that way. My first name is Yvonne, derived from a word for yew tree — the tree that stands guard in many British church graveyards. My middle name, Clare, comes from a root meaning “bright”. So, first the death and then the light. Maybe it’s fitting that I decided (without knowing any of that) to go by my optimistic middle name.

That’s one example of how names can mark a loss and celebrate new life. If you’re looking for a fitting name for a rainbow baby, read on for inspiration. And if you’ve already decided on something, then like my mum, you may find that it has layers of meaning that only reveal themselves over time.

The best-known of the baby names meaning rainbow is Iris, an elegant vintage revival of recent years. The Mayan name Itzel, meaning “rainbow lady”, is also a steady presence among the top baby names in the US. The word name Rainbow is rare but definitely possible, as proved by famous bearers like author Rainbow Rowell, and celebrity children including Jamie Oliver’s daughter Petal Blossom Rainbow, and Holly Madison’s daughter Rainbow Aurora.

Break it down, and you get Rain and Beau (or Bow or Bo), all cool and streamlined unisex names. There are few boy names meaning rainbow, but plenty with related weather meanings, like Samson and Elio (sun), or Niall (cloud).

Here are 20 name ideas connected to rainbows and weather such as storms, rain and sunshine.

Another way to celebrate new life is a name with a positive, forward-looking meaning such as hope, healing or light. These are some of our favorites.

These are the names that acknowledge the struggle, with meanings like sorrow, dark, and remembrance (and a couple more yew tree names, too). Whether you like them because of their meaning or despite it, there are some appealing options here.

As well as its etymological roots, a name’s meaning also lies in what it signifies to each of us personally. With that in mind, a rainbow baby’s name could honor their sibling, openly or subtly, in any way that feels right. Possibilities include:

Same initial: it’s not as common as it was historically to repeat late siblings’ names, although there’s nothing legal to stop you if it feels appropriate. Using the same initial, or a name that repeats another sound — like Arlo to honor Hugo — is a way to balance remembrance with embracing the new baby’s own identity.

Link the meaning: country singer Granger Smith gave his new baby the middle name Beckham, meaning “homestead by the stream”, as a subtle nod to his late son River. There are all sorts of ways to do something similar. Lily’s sibling could have another flower name or nature name, or Jonah’s sibling could have another name meaning “dove”, like Callum or Paloma. Read more ways to connect sibling names here.

Happy memories: maybe there’s something from their sibling’s life that you’d like to celebrate in a name, like a place you visited or a song you loved during pregnancy. Writer Melissa Willets gave the example of Disney character names in honor of a happy family holiday. Or on the flip side, something that comforted you in grief: a cathartic walk in a snowstorm might inspire Snow as a middle name, or the friend who held you could find their own name honored.

This week marks Pregnancy and Infant Loss Remembrance Day in the USA and Canada, and Baby Loss Awareness Week in the UK.