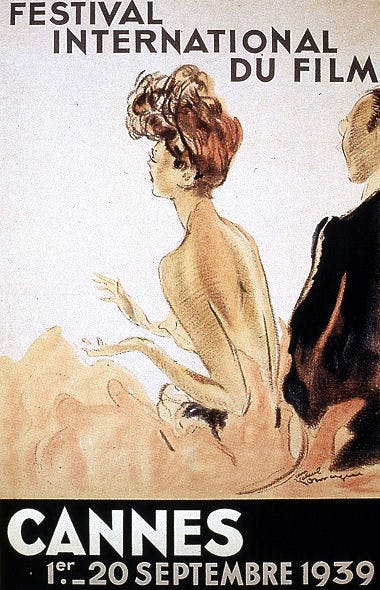 Continuing her exploration of motion picture award names,  one of our favorite guest bloggers, Abby Sandel, creator of the popular site Appellation Mountain , looks beyond Hollywood to find some interesting names associated with winners at Cannes, Berlin and Britain award ceremonies.

Marquee-worthy baby names are all the rage, with choices ranging from the Top Ten Ava to surnames like Harlow.  Searching past Academy Award winners can provide inspiration for baby names, from the glamorous to the unusual.

But what about all those other Award shows?  Oscar may be king in the US, but elsewhere, actors and directors compete for Goyas, Bears, BAFTAs, Ariels and, of course, the prestigious Palme d’Or at Cannes.

The following names are culled from award winners from across the globe, but proceed with caution.  Just like not every Oscar-winning character makes for a worthy name sake, that remains true for this list.

ALIDA:              1960’s award-winning French film The Long Absence was one of many starring roles for Italian actress Alida Valli.  She often was billed by her surname as VALLI.

CALYPSO:          Neither an actress nor a character, the Calypso was the name of the ship used by Jacques Cousteau in the celebrated 1956 The Silent World, a documentary and early work by famed director Louis Malle.

GERTRUDE:         1946’s La Symphonie Pastorale is a French film based on a novel.  Gertrude is a blind orphan adopted by a pastor.  Both her foster father and stepbrother fall for her.  Drama follows.  The luminous Michèle Morgan starred as Gertrude – and would later lose out on the starring role in Casablanca.

KESA:               Japan’s first post-war international hit was 1953’s Gate of Hell.  The story of a samurai and Lady Kesa, the woman he rescues propelled Machiko Ky? to stardom.  She went on to work with Akira Kurosawa and Kenji Mizoguchi.

LUCIENNE:        Not an actor at all, but the jeweler who designed the original Palme d’Or award for the Cannes Film Festival.

MAGALI:            Turkish-French actress Magali Noël was best known for her work with Italian director Federico Fellini, including appearing as Fanny in 1960’s legendary La dolce vita.  She also scored early French rock’n’roll hits as a singer in the 1950s.

SERAFINA:          Decades before Ben Affleck and Jennifer Garner chose Seraphina for their second daughter, French director Marcel Camus made Black Orpheus in Brazil in 1959.  A truly international production that would garner recognition at Cannes as well as an Academy Award and a BAFTA, Serafina was one of the characters.

ALEKSEY:          Russian film star Aleksey Batalov was a major figure in the Soviet cinema, starring in 1957’s Palme d’Or-winning The Cranes are Flying, and racking up honors and awards at home, too.

BRENO:             Brazilian athlete-turned-actor Breno Mello starred as Orpheus opposite Marpessa Dawn in 1959’s Black Orpheus.  (If you’re counting, that’s the third name on the list from the movie – truly an inspiring cast!)

DENHOLM:        Americans known Denholm Elliot best as Indiana Jones’ mentor in the movie franchise, but he was also a three-time BAFTA award winner and an Oscar nominee.

LEOPOLD:          Austrian-born Swiss director Leopold Lindtberg won at Cannes and the Berlin Film Festival in the 1940s and 1950s.

MORITZ:            The German actor Moritz Bleibtreu was a regular on the small screen in his native country, but his breakout, Silver Bear-winning role was as troubled Bruno 2006’s  Elementarteilchen.

STELLAN:            Stellan Skarsgård is well known in the US today, but back in the 1980s, the Swedish actor had already snagged a Silver Bear for Best Actor at the Berlin Film Festival as the star in award-winning Swedish film The Simple-Minded Murder.

TAHAR:              Tahar Rahim is a rising star in French cinema.  His 2009 performance as the prisoner Malik in The Prophet won him a César Award for Best Actor.

It’s a list that could go on for pages.  Plenty of international stars do go on to succeed in Hollywood, but the foreign film section of Netflix is packed with intriguing offerings rarely seen in the US.  Nearly every  movie suggests some appealing appellation for your consideration.