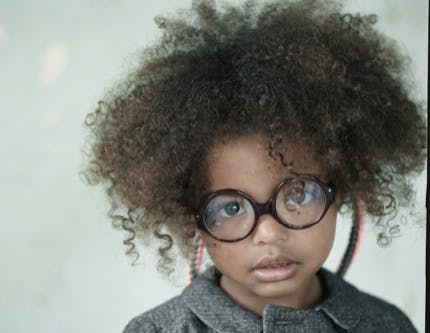 Have you heard of Warby Parker?  They’re the cool vintage=inspired online eyeglass company that launched a huge trend.  And now they’re joined by a host of other geek chic eyewear purveyors, including one for kids called Very French Gangsters, where we found our adorable glasses-wearing model.

But the real point here, as it always is on Nameberry, is names.

I was perusing the wares on Warby Parker the other day when I was distracted by the names of the frames.  Some embody a lot of geek but not much chic: Fillmore, Digby, and Duckworth. And then there are those like Sloan and Sawyer, Reynold and Larkin, which are chic without the geek.

So what are the Geek Chic names that suggest a kid wearing glasses, in the cutest, coolest possible way?  Warby Parker includes some boys’ names that qualify: Boyd, Clyde, Ellsworth, Marshall, Percy, Wilkie, along with one girls’ name that does by a stretch, Mabel.

We have a lot more nominations for Geek Chic names though.  Warby Parker, are you listening?

For more ideas, see our Clunky but Cool lists for girls and boys.

NEWS FLASH! To celebrate the opening of the brand new Nameberry Store, we’re giving away a copy of an exclusively-designed Nameberry art print featuring your child’s name and birthdate.  To enter, like us on Facebook and then send us an email at contest@nameberry.com to tell us so.  If you’re already our friend on Facebook, ask one of your friends to like us and then send both your names and email addresses to contest@nameberry.com.

There’s more!  We’re giving away something new every day this week.  For up-to-the-minute announcements, sign up for our newsletter or check in for updates on each day’s blog.