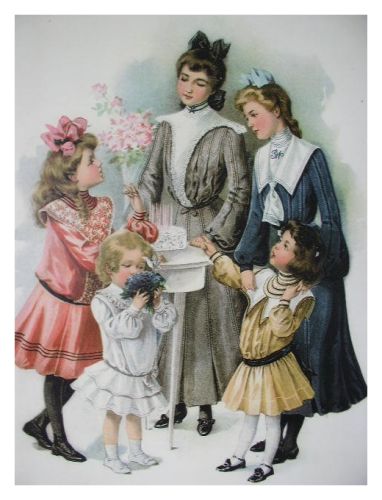 Guest blogger Eleanor Nickerson follows her recent keen analysis of Victorian names with the period of British baby names that came next: the Edwardians.

What marks the Edwardian era of British baby names as distinct from those used in the Victorian period is the sheer number of different names used. In previous centuries the standard practice was to select a child’s name from the immediate family. When an infant died the next child to be born would be given that name, limiting the name pool to five to eight names in a family. Fanciful names were reserved for the aristocracy, and even they kept them permeating along the family line.

The Victorians made a change to this idea. Names borne by a deceased family member were now considered ‘unlucky’. Parents suddenly had to look elsewhere for names and artistic, literary and religious movements provided much needed inspiration. The Victorian love of anything ‘gothic’, and the influence of Tennyson and the Pre-Raphaelites brought back medieval and mythical names like Lancelot, Ralph, Edgar, Alice, Elaine, Edith and Mabel; the Romantic movement re-introduced names such as Wilfred, Quentin, Cedric, Amy and Rowena; and the religious Tractarian movement revived long lost Saint’s names like Augustine, Benedict, Ignatius, Euphemia and Genevieve.

By the Edwardian era many of these previously obsolete names had become de rigueur and permeated all the social classes. More than at any time before, the gap between the names of the upper classes and those of the lower was considerably contracted. The 1911 census shows that many wealthy household members shared the same names as their domestic servants.  For example, Constantia Beatrice Sophia, born 1905, was the daughter of a furniture mover and Lancelot Frederick Charles, born 1907, was a nurseryman’s son, showing that these previously ‘upper class’ names were now being enjoyed throughout the social classes.

One of the biggest trends of the Edwardian era of British baby names was the use of nature names. Some of the most popular names such as, Daisy, Iris, Ivy, Primrose, Beryl, Pearl and Ruby were used sparingly in the first half of the nineteenth century – and, interestingly, equally spread amongst boys and girls. By the 1880s, these names started to became very fashionable (now solely for girls) which led to them becoming the darlings of the Edwardian age.Here are some interesting Edwardian flower baby names:

The second big trend particularly prevalent in the Edwardian period was the use of Celtic names. Many “new” discoveries were made by Late Victorian parents from a rich choice of Scottish, Welsh and Irish names including Blodwen, Brenda, Ceridwen, Eileen, Evan, Gwendoline, Gladys, Ivor, Kathleen, Maureen, Owen, Sheila and Trevor. This was actually quite a cultural breakthrough as the Celtic languages had been suppressed by the English for centuries. Welsh children in the Victorian period, for example, were forbidden from speaking Welsh at school and punished harshly if they did.

Late Victorian Welsh parents, in particular, became very bold in their naming habits, not only by reviving many long lost gems from Welsh mythology – such as Eleri, Olwen, Rhiannon, Caradoc, Hywel, Gareth, and Merlin/Merddyn – but they also created many new names from Welsh vocabulary that became big hits for Edwardian parents.

Edwardian Welsh names not found in the Birth Index before 1880:

And it wasn’t just with first names that British Edwardians liked to be different. A particularly interesting quirk of Edwardian parents was their love of assonance and alliteration. First names, middle names and surnames were all used to gain this effect. Beatrice Bessie Battiscombe and Reginald Ronald McDonald are two Edwardian babies who demonstrate this trend perfectly.

Below are a few samples of recorded Edwardian alliterative and assonantal names:

Eleanor Nickerson, better known to nameberry message board visitors as Elea, is a twenty-something primary school teacher living in Coventry, England who, beyond having a name obsession, loves researching family trees, poring through old records and adores anything to do with history.