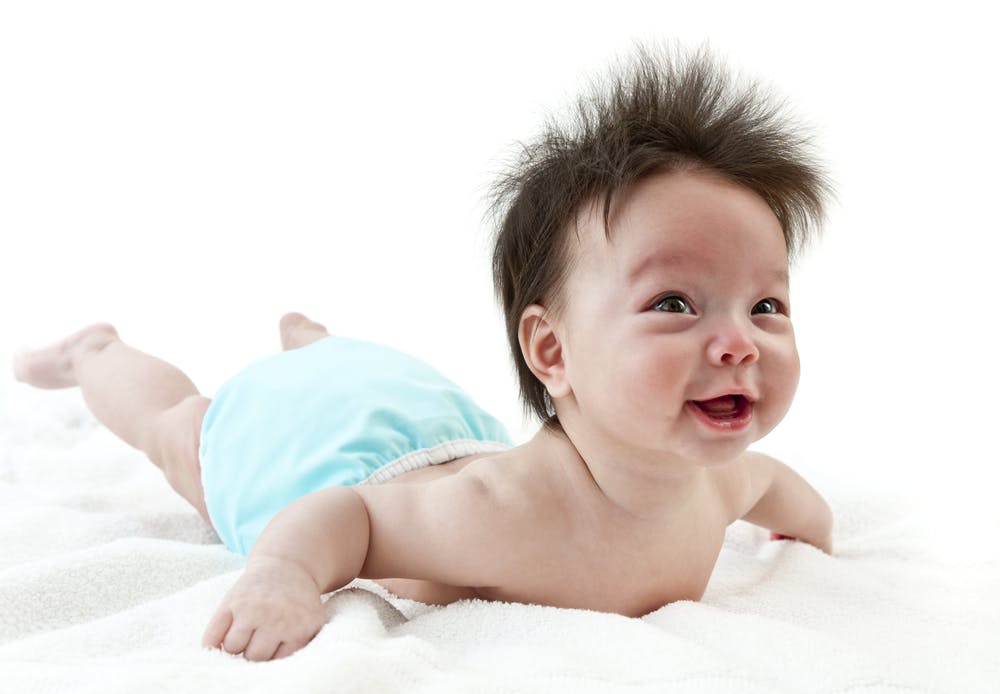 What are the hottest baby names today, those zooming toward the top of the popularity list?

Identifying which names are moving fastest toward the top is an art, but there can also be some science to it.  We asked the Wizard of Nameberry, our engineer Hugh Hunter, to plot the upward trajectory of 20 names that have been vaulting up the charts over the past decade.  He crunched the numbers and came up with a Hotness Quotient: a number that plots each name’s relative hotness and stands for the number of places it will jump each year if it continues moving up the ranks at the same pace.

We tracked all the names on our list from 2001 through 2013; entering the Top 1000 more recently than that skews the HQ unfairly high.  Eloise, which reentered the Top 1000 in 2009, for instance, has an HQ of 145, nearly three times as high as our Number 1 name Adeline, while newcomer Jax, which entered in 2005, stands at 96, twice as high as our top boys’ name Finn.   But these names are unlikely to continue moving up at this velocity.

Although Violet got up off the chaise where she’d been swooning in the late 1990s, it wasn’t until she was chosen by Jennifer Garner and Ben Affleck for their daughter in 2005 that the name really motored for the top, now at Number 69.  Although Violet’s HQ of 50 would catapult her into the Top 20 next year, we don’t think her rise will continue to be quite that dramatic, at least not unless another high-profile celebrity couple chooses the name.

Stella’s trajectory mimics Violet’s, taking off after a decades-long slumber in the late 1990s and rising straight toward the top.  Sassy Stella, which means “star,” has been chosen for their daughters by several celebrity couples and is also in the Top 100 in Germany and Sweden.  Right behind Violet at Number 70, we can imagine Stella joining sister names Ella and Isabella in the Top 20 in a handful of years.

Sweet Adeline has moved up more than 500 points since 2001, now standing at Number 232.  At its current trajectory, we’d expect it to be in the Top 100 in 2017 and the Top 10 by 2020.  Will it really get there?  Sister name Adelaide’s trajectory is steeper but it entered the Top 1000 more recently, but we do see these two similar names near the top of the list within the next decade – much as Emma and Emily have dominated over the past several years – with mutual short form Addie becoming as common as Ellie and Emmy are now.

Lila is one of those names whose popularity and hotness are confusing.  As one of a group of very similar names – Layla and Leila and Laila – all with high HQs of their own, it can seem as if you hear it everywhere.  But at the same time, Lila with this spelling stands only at Number 155, so it’s far from being a Top 10 name.  Not for long, though.  With an HQ of 40, Lila is due to enter the Top 100 within two years and may reach the Top 10 within four….though Layla, now at Number 30, stands to get there first.

Although Juliet has been on the US Top 1000 nearly every year since 1880, it only started seriously taking off toward the top a decade ago.  Now this diminutive of the ancient Roman name Julia, made most famous by Shakespeare, is at Number 238 and likely to enter the Top 50 in a handful of years.

Beatrice hit is lowest mark ever in 2001, when it nearly disappeared from the Top 1000 completely, only to turn around and begin heading back toward the top.  A Top 100 name from the 1890s till the 1930s, Beatrice still has a projected 15 years to go before it achieves that rank again from its current standing at Number 593.

Although Elsa’s current fame seems propelled entirely by her starring role in the movie Frozen, she actually began her ascent in 1999, turning upward after hitting the very bottom of the Top 1000 list and now standing at Number 528.  Elsa’s HQ of 32 suggests it will take her more than a decade to make the Top 100 but we predict her trajectory will pick up steam and she’ll make it in half that time.  Elsa is a multicultural hit, standing at Number 61 in Spain and at Number 3 in Sweden.

Cora is one of those surprising names that has always been on the Top 1000, ranking in the Top 100 until just about a century ago, when it began a long downward slide.  It didn’t start heading back up again until the 1990s; and now stands at Number 127.  At its current rate, Cora should break into the Top 100 again in the 2014 statistics and could rank among the Top 25 names before 2020.

Aurora is another name most people would be surprised to learn has always ranked among the Top 1000, but it’s at its highest peak by far right now, standing at Number 145 with the Top 100 in sight within the next two years.  Aurora’s classical origins – she was the Roman goddess of the dawn – and romantic feel combine to fuel its current popularity.

Even before Beyonce and Jay-Z chose Ivy as their daughter’s middle name in 2012, this old-fashioned botanical name had begun its upward climb.  Now at its all-time zenith at Number 152, Ivy could break into the Top 100 for the first time ever within three years.

Finn is the leader of a crew of Irish boy names that have risen from obscurity to take the US by storm in the past decade.  The name of the greatest hero of Irish mythology, Finn McCool, the name entered the US Top 1000 for the first time in the year 2000 and has now risen to Number 250.  With an HQ near 50, Finn is projected to stand within the Top 50 names in the next five years.  Finn ranks among the Top 100 names not only in its native Ireland but in Scotland, the Netherlands, and Germany, where it stands at an astonishing Number 5.

Emmett owes its popularity to Top 10 sister names Emma and Emily as well as to its featured role in Twilight.  A well-used name at the end of the 19th century, it began a long downward slide before reversing course in the late 1990s, now standing at Number 173.  Both Emma and Emily were Number 1 names and there’s no reason why Emmett can’t join them at the top within the next handful of years.

The New Testament Silas got style boosts from The Da Vinci Code and from television’s Weeds, rising since the 1990s to reach Number 116 today.  And the name continues to be hot, in line to reach the top of the list within the next three years.

Hudson, as in the river, has the same New York vibe as cousin name Brooklyn but is subtler and cooler.  It’s jumped nearly 500 places in the past 12 years and is in line to reach the Top 10 within two or three years.

Dashing Biblical name Asher languished nearly unused for most of the 20th century, only to start its meteoric rise in the late 1990s.  Today, Asher sits just outside the Top 100.  This is one name we predict will make it to the very top of the list; it’s on target to crack the Top 10 in the 2016 standings.

Two-syllable boy names that end in either R or N are wildly fashionable.  Occupational name Sawyer first cracked the Top 1000 in the early 1990s and today lies a few points outside the Top 100.  We can see Sawyer joining Asher near the top of the list by 2016.

You can think of Declan as Finn’s younger, weirder brother, nearly unheard of in the US until 1998 when it hit the Top 1000.  Fifteen years later, it’s ready to break the Top 100.  Will it ever climb to the Top 10?  Unique Irish names have a way of taking the US by storm: Look at the once-unusual Aidan, Ryan, and Sean.

Jasper is distinctive as the only widely-used jewel name for boys; it’s always been on the US Top 1000.  Now it’s climbed to Number 248 and at its current pace could take a decade to reach to Top 10.  Still, we don’t think it’s heading to the top of the list but will rather remain as a fashionable classic.

Ezra is definitely one of the stars of the new wave of biblical boy names, joining Asher and Silas – along with Levi and Moses and Abel and Jude – in taking over the spots once held by older guard biblical boys’ names from Aaron to Zachary.  After nearly vanishing in the 1960s, Ezra now stands at Number 143 and seems poised to keep climbing till it reaches the upper reaches of the popularity list, which should happen in the next handful of years.

Other baby names with high HQs include Eleanor, Clara, Eliza and Phoebe for girls; Abel, Roman, and Felix for boys.

Which names do you see as hot and heading for the top?