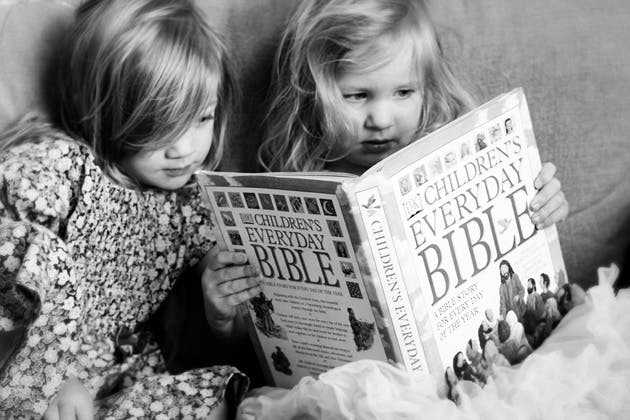 If you want to name your baby from the Bible but are put off by the popularity of Jacob or Abigail, consider these twenty-two obscure yet usable choices. We eliminated a few favorites, such as the jubilant Jubal, in favor of names more likely to be new to many parents.

For ease of use, we have divided the list below into girl and boy names. But it should be noted that many Hebrew names, especially ones ending in -iah (signifying Jehovah), are actually unisex.

Read on for a selection of our favorite seriously underused Bible names for modern babies.

She was the wife of Joseph and the daughter of an Egyptian priest, and the root of her name may be the Egyptian goddess Neith.

Focusing on this name’s musical sound and great meaning (“Jehovah is exalted”) and ignoring its nasty Biblical bearer could make it a lovely modern choice.

This undiscovered Old Testament place name, which comes with nicknames Cassie and Phia, would be a gorgeous choice. The full name shares sounds with popular Sophia.

This early form of Elizabeth was the name of Aaron’s wife.

An emphatic Aramaic phrase used by Paul, meaning “Our Lord, come,” this could make a pretty name with nicknames including Mary, Merry and Annie.

This name is literally queenly, belonging to the wife of an early king of Edom. Its dignity could be softened with nicknames Hetty, Belle or Bella.

Also spelled Shifra, this name belonged to one of the Hebrew midwives in Exodus 1:15 who defied the Pharaoh’s command by refusing to kill the Hebrew boy babies they delivered.

This unisex name would probably be read as mainly feminine these days. It could be an interesting way to honor a Timothy.

It’s used only once, in 1 Chronicles 4:16 — for a man, but again would likely read more feminine than masculine to the twenty-first century American ear.

A wife of Lamech in Genesis 4:19, this zippy name was in the US Top 1000 in the 1800s. An important name in Madeleine L’Engle’s novel A Swiftly Tilting Planet, where it evolves through forms Zyll and Zylle, it deserves to be revived.

This soft name, which comes with cool nickname Ash, belonged to a son of Benjamin. Ashbel Smith was an American medical student befriended by James Fenimore Cooper when they were in Paris in the 1830s.

A dashing name with a dashing namesake! The most famous Jehu was a military commander-turned-king known for his crazy chariot driving. Read his story in 2 Kings 9 & 10.

This place name was also the symbolic name given by God to the prophet Hosea’s first son. Its cool Z and its similarity to the more familiar Israel could make Jezreel a good modern choice.

An almost unknown name, related to Araunah, which fits the two-syllable, n-ending boy name trend. His threshing floor was purchased by King David as an altar site.

The first judge of Israel, Caleb’s nephew and son-in-law. With its similarity to favorites Daniel and Nathaniel, Othniel could certainly make it in the modern world.

This soft-yet-sturdy name belonged to Moses’ father-in-law (also called Jethro) and was the second middle name of J.R.R. Tolkien.

In spite of Meshach and Abednego, Shadrach deserves to be considered. The handsome Babylonian name of the Hebrew captive Hananiah would shorten to the crisp Shad.

Like Ornan, this rare name fits current trends; its vowel sounds match Nathan’s. Shaphan was most notably the name of the scribe who brought the lost book of the Law to Israel’s King Josiah.

This Old Testament place name, also spelled Telassar, caught my eye because of its similarity to Elessar, one of Aragorn’s names. It’s also similar to rising star Balthazar.

The name of a man whose descendants returned to Jerusalem and probably the root of Zacchaeus, Zaccai sports hip initial Z and could be nicknamed either the mainstream Zac or the newly cool Cai.

This vibrant name had a couple of bad-boy bearers (read about them in Numbers 25 and 1 Kings 16 before using it!) Ethan Allen had brothers named Zimri and Heber; in 1 Chronicles 2:6, Ethan, Zimri and Heber are listed as brothers.

Aurora Firth, known on Nameberry as @auroradawn, is an Alaskan Christian, artist, and big sister with an incurable love for names.

View all of Aurora Firth's articles