Sibsets: Finding a name for baby #3 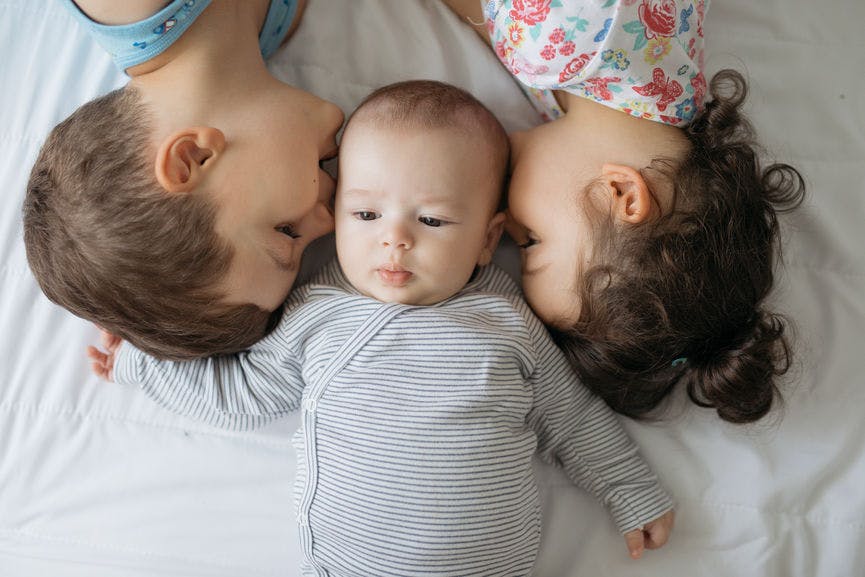 They’ve set quite the pattern with their first two kids’ names! Now they’re expecting again, and need to complete the sibset with a name they love every bit as much.

We are struggling with a name for our third child.

We have a son, Christopher Joseph, and a daughter, Gwendolyn Grace. They are primarily called Kit and Gwen or Gwennie.

I feel like it’s much harder to name each consecutive child because I feel like I keep setting up themes that I want to continue, but I want each name to sound sufficiently different from the others.

Between our two existing children, these are the themes we have going:

– An animal associated with each child (a kit is a baby fox; Gwendolyn is affectionately referred to as Wendybird, a Peter Pan reference)

I also like that they have different starting consonant sounds and different middle vowel sounds.

If our third child is a girl, we think we’ve found the perfect name: Eleanor Pearl with the nickname Nora.

For a boy, we’re stuck. We have names that we like, but none perfectly fit within the themes and criteria I’ve set up. His middle name would be James.

Milo – Not three syllables and no nickname, plus missing an obvious animal association.

Our third child might be our last, so I don’t want to leave them out of any of the themes we have in our naming. At the same time, I want to adore their name in its own right.

Any suggestions you can think of? Thanks for your help!

Patterns can be deeply satisfying, linking names in subtle ways. But sibsets come with pitfalls. Stick to your criteria too closely, and you’re calling a kid Ptarmigan.

There are two keys to choosing a successful family pattern name. You’ve identified the first: it’s not worth sticking to the rules if you don’t plain love your choice! But second, recognize that there are lots of ways to connect your children’s names. Options that might not check every box could still fit with your family’s style – and feel like the right match anyway.

Let’s look at some names that fit most of your rules, and feel like siblings for Christopher/Kit and Gwendolyn/Gwennie/Wendybird, too.

Adrian – A place name tied to the ancient world, Adrian has centuries of history behind it. But it might shorten to Ari, a name that means lion in Hebrew and eagle in Old Norse. Another bonus? Adrian James sounds very much like a brother for Christopher Joseph and Gwendolyn Grace. There’s also Archibald, which offers an even more obvious path to the nickname Ari – but maybe that’s a little too different?

Arthur – Yes, it’s only two syllables. It feels downright brief compared to Christopher and Gwendolyn. But it’s very much the same kind of name, at home across many decades. You might shorten it to Ari, but my favorite Arthur nickname is Bear. One of Arthur’s several possible origins is a Celtic word for the animal.

Barrett – Barrett feels like more of a modern surname than a traditional first, but I think it could easily be a brother for Christopher and Gwendolyn. It shortens to Bear based on sound alone.

Jonathan – This is probably my favorite of the options. It’s a traditional name, three syllables, and there’s a slightly different vowel sound, too. Nicknames abound, but there’s one that stands out to me: Jay. That makes it a subtle bird name. Even better? There’s Richard Bach’s modern fable, Jonathan Livingston Seagull.

Lionel – Leonardo doesn’t seem quite your style, and Leonard is too short. But how ‘bout Lionel? Nickname Lion is king of the jungle, and Lio reminds me of Milo. It might be a little bit too different, but I think it’s a solid traditional choice in the key of Arthur.

Raphael – This Biblical name belongs to an archangel. While it’s never been wildly popular in English, it’s widely used in many European languages. It’s Hebrew in origin, of course, but short form Rafe coincides with a pronunciation of German Ralph. (Think Ralph Fiennes.) And that name means wolf counsel. It’s a little bit romantic, a little bit fierce. Kit and Rafe sound like brothers straight out of a storybook.

Robinson – Plenty of surname names extend to three syllables, like Harrison for Henry, or Robinson for Robert. Robinson makes my list for two reasons: first, there’s the connection to the bird. And second, Rob sounds like a great brother name for Kit.

Sebastian – I’ve heard Sebastian called Bass and even Sea Bass, so I thought it might work. But somehow Sea Bass doesn’t have the same ring as Kit or Wendybird. But then it hit me: Bay! A bay horse refers to a specific coat color; for short, they’re sometimes just called a bay. That gives Sebastian two possible animal tie-ins. Plus, I think Bay makes for a great nickname for Sebastian James.

I think Adrian, Jonathan, and Sebastian fit your sibset pattern best, along with Lionel and Raphael if you’re feeling a little more daring. But if none of those seem like The Name, then I’d go back to the drawing board – even if it means sacrificing part of your pattern to find a choice you love.

Let’s hear your best traditional names with links to the animal kingdom in the comments!

Readers, would you – or did you – stick with a pattern when naming your children?