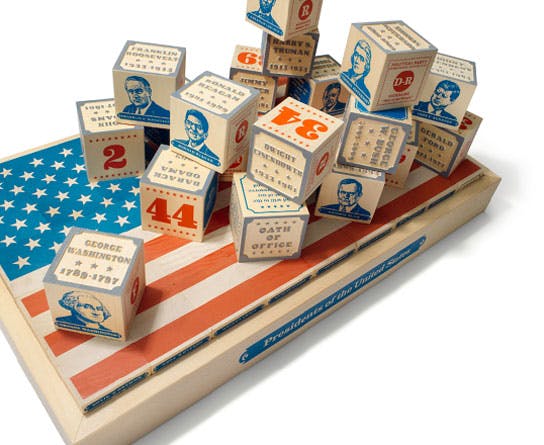 On previous Presidents’ Days, we’ve looked at the first and last names of the Chief Executives, their wives and their children’s appellations.  So what’s left?

Their middle names! And in this era of middle-name mania, we think they merit our attention.

Many of the early people in this position did not have middle names, having come to the office before the practice became so prevalent. A significant number bore their mothers’ maiden names; a few others switched the first and middle and so became know by the name listed below.  One—Gerald Ford—changed his name completely.

So, if you don’t like any of the Presidents’ first or second name, here’s an alternative option.

Abram—James A. Garfield was the 20th president.  Abram was the name of his father, a wrestler who died when he was an infant.

Alan—Chester A. Arthur followed Garfield as the 21st president. He was born in 1829, a year when the name Alan was not very well used. though it dates back to the time of Robin Hood.

Baines—36th President Lyndon Johnson was the son of Rebekah Baines Johnson, who descended from a distinguished family of Baineses. Baines is a Scotttish surname related to bones.

Birchard—As if Rutherford weren’t heavy enough for future President Hayes to carry, he also inherited his mother’s maiden name, kind of an arboreal cousin of Richard. Unusual names ran in the family—his mother’s brother was Sardis.

Clark—Herbert Clark Hoover (#31) was born into a Quaker family that called him Bertie.

David—34th Pres. , born David Dwight Eisenhower, was another who did a name switch, probably because David was his father’s name.

Earl—James Earl Carter, Jr.—one of a disproportionate number of juniors to reach the country’s highest office—insisted on the use of his informal , non-presidential nickname Jimmy.

Gamaliel—This is the G in Warren G. Harding—a Hebrew biblical name not likely to see much use in the 21st century. Harding, nicknamed Winnie by his family, was the 29th President of the United States.

Grover—22nd and 24th President Cleveland—the only one to serve two non-consecutive terms– dropped his first name of Stephen in favor of his middle, Grover.

Henry—The ninth President of the US was William Henry Harrison, who previously held many other high political positions and, incidentally, fathered ten children.

Herbert—One of the two middle names of George Herbert Walker Bush, the 41st President, and father of #43. Walker was the maiden name of his mother, Dorothy.

Howard—27th President William Howard Taft was born into a powerful political family—his father, Alphonso, was Secretary of War and Attorney General under President U. S. Grant.

Hussein—Barack Hussein Obama II was given the name of his Kenyan father; Hussein was the name taken by his grandfather when he converted to Islam.

Jefferson—42nd President Bill Clinton was born William Jefferson Blythe, Jr., inheriting the name of his father, who died in an accident before he was born.

Milhous—Richard Milhous Nixon was another who was given his mother’s maiden name as a middle. He and three of his brothers were named for legendary kings of England: Richard was in honor of Richard the Lionhearted.

S. S stands for nothing in the middle of President Harry Truman’s name, which seems to have been a practice in certain Scots-Irish families.  His parents chose the initial S to please both the baby’s grandfathers—Anderson Shipp Truman and Solomon Young.  Harry’s brother did get a middle name—Vivian.

Ulysses—He was born Hiram Ulysses Grant. The change came as a result of his being mistakenly registered at West Point as Ulysses S. Grant, which he reputedly was happy to accept as a way of ridding himself of the embarrassing initials H.U.G.

Walker—Walker served as the familial middle name of both Bush presidents, and was the source of the younger George’s nickname “W.”

Wilson—Ronald Reagan’s middle name was not chosen in honor of the 28th President, but rather his mother, born Nelle Wilson.  His father gave him his lifelong nickname “Dutch,” as in “fat little Dutchman” and referencing his son’s Dutch boy haircut.

Woodrow—Thomas Woodrow Wilson, the 28th President, grew up being called Tommy.  He began going by his middle name around the time he started his teaching career at Bryn Mawr College.