How I Named My Baby: Bear Anthony 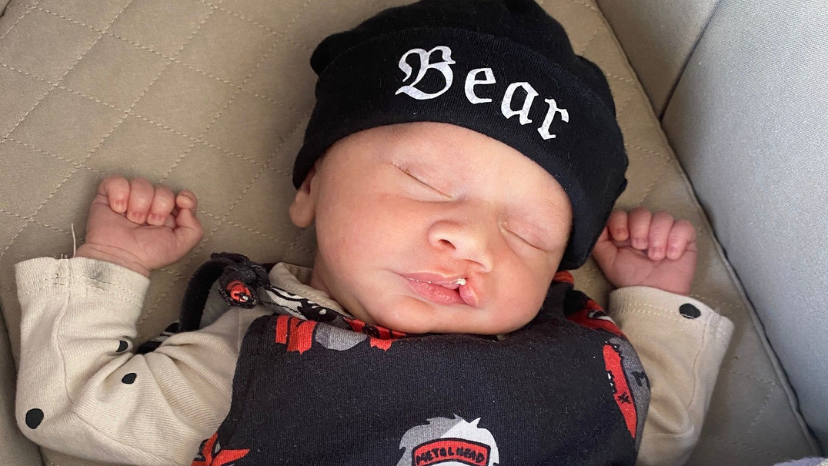 Below, we chat with Jennie about how she and Kristian named Bear.

How did you name Bear?

I really like animal names for people. I love animals — I’m vegan — and I’m obsessed with our two dogs, Dio and Chewy. I floated so many animal names to Kristian.

The first one I suggested was Wolf or Wolfie, and he said absolutely not because of the gladiator. I liked Wren, Birdie, and Tiger. But it was only when I said Bear that Kristian went, “Yes!” It’s because he’s a fan of Bear Grylls — that association really helped me because Kristian thought animal names were a bit ridiculous.

When I was pregnant, we told everyone the name — we couldn’t keep it a secret! I kept saying it accidentally in conversation, so we had to tell people. At Christmas, so many people bought him bear outfits, so he has so many bear costumes! And the wallpaper in his bedroom looks like a forest, so he might genuinely think he’s a bear!

Working in radio, we get names texted through — people want you to read their texts. I’m always just drawn to the names. I’m more likely to read out a text from someone if I’m like, “Oh that’s a cool name!” If I got a text from someone named Bear, I’d be like, “Shoutout to Bear!” It stands out a little bit, which can only do him well in life.

Would you use another animal name for a sibling?

I’m toying with this because I love the other animal names! I don’t know, but if I didn’t do an animal, I’d definitely use a name that begins with a B. I’m Jennie and my brother is called James — I like the alliteration. I like short names as well because Kristian’s surname is Tiffany.

We’ve got a few names that start with B that are either three or four letters. I think they’d go nicely with Bear. If we had a girl, she would have been Blu. Tiffany is a shade of blue, so I thought Blu Tiffany was really nice. For a boy I love Bam. It’s a bit in-your-face, and I like that.

Tell me about Bear’s middle name!

We went with Anthony, which is my dad’s name, because me and my fiancé are engaged, not married. Bear has taken Kristian’s surname, which can feel a bit brutal when you’ve carried a child for nine months, then birthed the child, and then they get your partner’s surname.

I was fine with the tradition of that but told Kristian if he was getting his dad’s family’s surname, he would get my dad’s name for the middle name. We call him Tiny Tony Tiff, which rolls off the tongue quite nicely. With Bear, he could always be Teddy. Some people have already started calling him that, maybe because he’s tiny and cute at the moment. Teddy Tony Tiff — we’re just getting ridiculous now!

How do you feel about your own name, and how did that influence your choice?

In England, Jennie Bond was a royal correspondent, so she’d do all the news stuff for the Queen and royal family. My mom saw it on telly one day and liked how it was spelt with an ie.

I like that my name is spelt a bit different. I would rather have a more unusual name than Jennie, if I could choose. Often radio presenters give themselves a nickname so they can stand out more. You get a certain energy from names. Morning shows are often called “Someone & Someone in the Morning.” If it was “Colin & Nigel in the Morning,” you’d be like, “I wonder how lively they’ll be.” No offense to Colins and Nigels.

I’ve wondered if I was called something more unusual, like Bear, if that would have stuck sooner on a show. That’s why I gave Bear a name that no one’s going to forget.

I did a podcast with my friend Amy called Two Non Blondes. We’re both radio presenters and women in radio rarely get to work together. We thought we’d make a podcast so we could work together. It just so happens we fell pregnant two days apart, so we changed our podcast from Two Non Blondes to Two New Mums about pregnancy and parenting. A big thing was Amy revealing her daughter’s name. While I was dead set on Bear for a while, Amy had a lot of back and forth. She eventually chose Eden, which is lovely.

A friend of mine also had a baby around the same time, and she’s called him Jenson. That would have been a nice one for me, being Jennie — Jen’s son!

Another friend and I were calling dibs on names, and she said Gloria. It’s one of the most gorgeous names I’ve ever heard. I quite like older names like Eden and Gloria.

In terms of “normal” names, we liked Ronnie, because that was Kristian’s granddad’s name.

What was the most surprising part of the baby name process?

Before you get pregnant, you talk about names so much — what would you call your kid if you were to have kids? And then actually, when there’s a real kid who’s going to have this name, I was surprised how serious you’ve got to take it. You can throw names about when you’re not pregnant, but when you’re expecting, you really have to treat it with a different level of attention.

How would you describe your style beyond baby names?

A bit grungy. Definitely not trendy — almost choosing to avoid trends. I’ve never been the cool person that fits in. You go the other way and life just gets easier. My style is laidback. Kristian is exactly the same. We like band T-shirts, baggy trousers — comfy stuff. Sometimes function over fashion, especially now as I’ve gotten into the outdoorsy life.

Me and my fiancé really like to climb mountains and go camping and be outdoors. We feel like Bear is quite apt because we can’t wait to do those things with him when he gets older. The name Bear really fits our energy.

Kristian and I are the type of people who when we make a decision, we stick to it. We’re quite tattooed people, and when you meet someone who’s covered in tattoos, they’re often quite decisive. They’re like, “I’m going to like this tattoo forever — or at least I hope I will.” And we will both get Bear tattooed on us at some point!

How did you decorate Bear’s nursery?

The feature wall is a woodland scene. The wallpaper is amazingly realistic — it looks like a forest. His cot is green to match that, and all the furniture is real wood.

A friend said to me, “Although you want to fill it with really cute stuff, try and keep it minimal because babies get distracted, and this is where you want him to sleep.” It needs to be a very zen room. And I feel like that when I go into Bear’s room — it’s really calm.

Did you pass down anything special to Bear?

He has my teddy bear. I called him Peanut Boo Boo. He’s a classic teddy bear like you would see in films. My mom found it when I was pregnant. We were like, “Bear needs a great bear!” We were going to get one personally made for him, but that can be quite expensive.

Peanut Boo Boo is quite a special one. I hope that when he’s my age that he still has Peanut Boo Boo. He’d better!

What was your favorite gift you received for Bear?

Kristian’s mum bought the whole set of the original Winnie the Pooh chronology. It’s in a big box and is so nice. Again, because it’s Pooh Bear, I thought it was quite cute. I grew up on those stories are we are really into books.

My fiancé was an actor when he was in his 20s and he’s really good at voices and singing. He can’t wait to do all the character voices when reading to Bear. And it’s stunning to look at on his shelf.

"I’ve tried everything for teething — the keys, the stuff you can put in the fridge — nothing worked. He absolutely loves Sophie the Giraffe. It gets him to sleep every night and helps him stop crying. It’s the best thing I’ve bought, 100%."

I Love My Daddy

"This book is really nice, and I haven’t yet got to the end of it without crying. I should probably get a book called I Love My Mummy too…"

"It clips into the pram really easily. You can go anywhere with it!"

"You can get so many sizes but I just went for it. I got the massive one and it was definitely the best decision."

"When I was growing up, my favorite book was Dudley Bakes a Cake. My mum found my copy in her loft and gave it to Bear."

"Amethysts are calming crystals — they help you sleep. I know not everyone’s into crystals, but Bear has slept so well. He has an amethyst right next to his cot. People can knock it, but it’s worked for us."

Thank you so much, Jennie!

See the entire How I Named My Baby Collection here, and for the chance to participate yourself, fill out our interest form.