How I Named My Babies: Rosie Cynthia & Ramsey Terrance 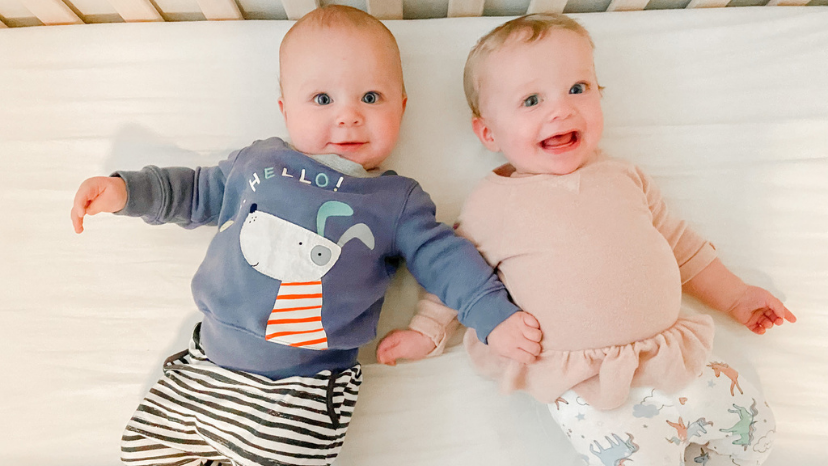 Hayley and Brad Maxey, business owners, live in small-town Wisconsin with their three children. This April they will celebrate the first birthday of their twins, Rosie Cynthia and Ramsey Terrance.

Here, we talk to Hayley about how she and Brad chose twin names for Rosie and Ramsey.

How long did it take you to decide on a name?

I had my girl name picked out after I had my first daughter Paisley. I always felt in my heart I was going to be a girl mom only, so I had only thought of girl names. Rose is such a classic name, and I wanted a cute twist. I thought the names Rosie and Paisley sounded great together! Little did I know I’d end up with boy-girl twins!

What strategies did you use to narrow down your name choices?

I kept the name Rosie in mind and wanted another R name. We both wrote a list of the names we liked that started with R and had each other cross off the names we didn’t like. We went through multiple names and finally decided on Ramsey because we are big Game of Thrones fans. When we were watching an episode and Ramsey Bolton came on, we both said “Rosie and Ramsey! Sounds great!” Overall, it took about three or four months to decide on a boy name.

Did you ask anyone for advice about baby names?

No! We asked people for advice with our first daughter Paisley and it was not a good idea. People give you their opinions and sometimes it’s just not what you want to hear so we kept it to ourselves with the twins.

Are your babies named after anyone?

Yes, all our children’s middle names are after a family member:

Paisley Joan (after my grandma Joan)

What would your babies be named if it was totally up to you? If it was up to your partner?

In the past, I would have liked to name a son Emmet or Silas. For our son, I really liked Reed and Rickey. I also loved the name Beau, but it’s Brad’s cousin’s name, so he didn’t want that.

Brad loves the name Wyatt, but I didn’t have any girl names I liked that started with W. If we’d only had a boy, I’m sure his name would be Wyatt.

How do you feel about your own name and how did that influence your choice?

I’m not a fan. It majorly influenced me because I was one of about fifteen girls in my high school named Hayley. It was a very popular name in the ‘90s, so I wanted to try to give my children names that weren’t trendy and maybe a little different.

What would your babies be named if they were the same gender?

If we’d had two girls, they would have been Rosie and Delilah.

Two boys would have been Ramsey and Rickey.

There are more patterns with girl names. Emma/Emmie, Nora, and Mila/Mia are popular.

What was your biggest fear related to baby names?

That the initials would spell something. A long time ago, a mom told me her son got picked on for his initials in school, so it haunts me to this day.

Which partner had more fun with the baby name process?

What was the biggest fight you ever had with anyone over names?

It was with my dad! He was so against our first daughter’s name. He feels you need a name that can go on a resumé, and he felt Paisley was unprofessional. Now, of course, he loves it, but it was a fight between us for a while.

Did you experience ‘name regret’ at any point?

Only with my older daughter, Paisley. There is another girl in town who works at our local gas station where I brought Paisley in one day. She asked about my baby’s name, and five months later she named her daughter Paisley! But it’s not a “regret,” I love Paisley’s name and it fits her amazingly.

Have any unexpected nicknames come up for your babies?

We call Rosie Row Row. Ramsey gets Ramey or Ramrod

Paisley came up with Rosie’s nickname because she was calling her “Yoyo,” so we turned it into Row Row. Now we sing “Row, Row, Row Your Boat” to her!

What was the most surprising part of the baby name process?

How much I overthought it! I never thought I’d be that person to run over their names 50,000 times to see how well they matched and if they sounded all good together!

What advice would you give someone just starting the baby name process?

Start off by asking your partner what names they don’t like! Are there any names that are off-limits? (i.e people they met and didn’t like, or maybe a relative they don’t want their kid named after). That way you can cross those names off your list immediately!

Thank you so much, Hayley!

For the chance to participate in How I Named My Baby, please email sophie@nameberry.com