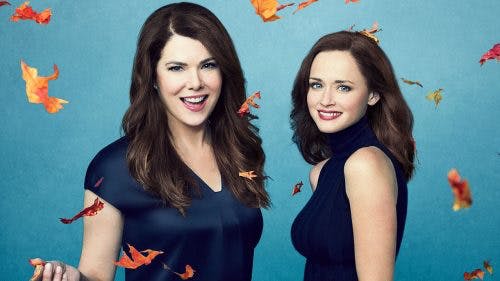 They’re back! Seven seasons wasn’t enough to tie up all the loose ends for our favorite residents of Stars Hollow. Could Luke and Lorelai work it out? Would Rory’s promising career in journalism take off? How about Hep Alien – are they the next big thing?

The Netflix addendum to the beloved series answers all of our questions and more, but if you’ve yet to binge watch Gilmore Girls: A Year in the Life, no worries. This post is spoiler-free.

Of course, if you’ve yet to watch a single episode, we will give away some of the secrets. But it’s still worth watching. One reason? Creator Amy Sherman-Palladino and her writing team must surely be name lovers. They embraced the obscure, and never gave a character a throw-away name – not even if the character made only the briefest of appearances.

Here’s our list of the the great Gilmore Girls names, from the mother-daughter duo at the heart of it all, to many a nicely-named supporting character.

Anna – A classic name for a woman who brings a surprise to the Stars Hollow family.

April – Luke’s determined daughter, younger than Rory, but similar in many ways.

Celine – Connecticut fashionista and personal stylist, with stories galore about her famous clients.

Clara – Little sister to Dean, and an admirer of Rory.

Drella – The surly harpist at the Independence Inn. Trivia note: the actress playing Drella originally signed on to play Sookie!

Francie – Francine “Francie” runs the most powerful club at Chilton. The series includes another Francine, too.

Honor – A member of the powerful Huntzberger family.

Juliet – Part of the super-privileged crowd Rory meets at Yale.

Lane – Rory’s rebellious BFF, who eventually manages to marry her rock and roll boyfriend and reconcile with her protective, conservative mom.

Lorelai – The name at the heart of the series, shared by mother and daughter, and a family name long before. We learn that the mom in the Gilmore Girls was named after her grandmother, who prefers to be called Trix. Both the more traditional Lorelei and the spelling used by the show soared following the series’ 2000 debut.

Louise – Another student at Chilton.

Odette – A character from the new installment of the series, though we never actually see her on screen.

Paris – Rory’s rival at Chilton, and later close friend and roommate. The name surged during the series’ run, but credit likely goes to celebutante Paris Hilton.

Patricia – Referred to by one and all as Miss Patty, owner of the dance studio, and choreographer of countless Stars Hollow community events.

Rory – Lorelai’s whipsmart daughter is admitted to the prestigious Chilton School in the very first episode, sparking much of the series’ drama. Rory is short for Lorelai. As her mom explains in the first season, “I named her after me because I was whacked out on Demerol.” The traditional Irish boys’ name took off for girls in the decade following the show’s debut.

Rosemary – Another Yalie with a great name.

Trix – Lorelai’s grandmother, the original bearer of the name.

Asher – A brilliant professor at Yale, and another instance of the show being ahead of the curve in terms of name choices.

Caesar – Right-hand man to Luke at the local diner.

Christopher – Rory’s father, well-meaning though absent through most of her childhood.

Dean – Down-to-Earth Dean becomes Rory’s very first boyfriend. He might be part of the reason the 1960s favorite name is back in vogue.

Doyle – Editor of the Yale Daily News when Rory joins the staff, and later, boyfriend to Paris. Doyle was in the top 200 in the 1930s.

Finn – Charming Finn is played by an Australian actor with an even more intriguing name: Tanc Sade.

Hanlin – Headmaster of Chilton, the prestigious prep school Rory attends. Plenty of names seemed almost created for Gilmore Girls characters, and this polished choice is among them.

Jackson – Jackson farms the best vegetables, so he’s a match made in heaven for chef Sookie. By the end of the series, the pair are expecting baby number three!

Jess – Family brings literary-minded Jess back to Stars Hollow, where he falls for Rory.

Kirk – Kirk is Star Hollow’s jack-of-all-trades, the kind of quirky character right at home in the town.

Luke – Luke Danes owns the local diner, Lorelai’s go-to coffee spot. It’s clear that Luke and Lorelai have chemistry from the first episode. Luke is one of the series’ most conventional names, but Luke is one of the most steadfast, reliable characters on Gilmore Girls.

Michel – The French concierge at the inns where Lorelai works, and eventually a dear friend.

Peyton – One of the reasons to love Gilmore Girls names? The writers never hesitated to choose creative names for the male characters, including unisex picks like Peyton and Jess. Actor Jon Hamm played Peyton, a suitor for Lorelai.

Raj – Another member of the Yale Daily News staff during Rory‘s time at the paper.

Richard – Dad to Lorelai, and grandfather to Rory, the successful and powerful Richard Gilmore showed a softer side as the series developed.

Rune – A short-lived character who attempts to win Lorelai‘s affections.

Straub – Dad to Christopher, and thus, Rory‘s other grandfather.

Taylor – Town Selectman and business owner Taylor Doose manages to infuriate nearly everyone in town, but his devotion to Stars Hollow is absolute.

Tobin – Another employee at the inn where Lorelai, Sookie, and Michel work, and once again, proof that even minor characters’ names pack a style punch.

Tristin – An early romance for Rory.

What are your favorite names from Gilmore Girls? Did I miss any of your favorites? How about any obscure choices?