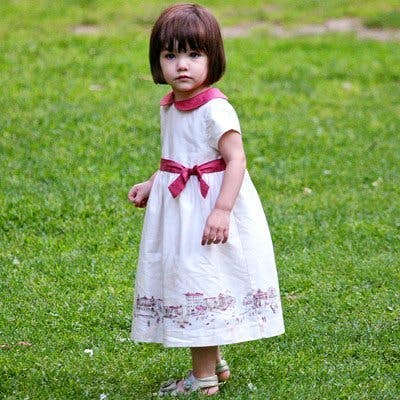 Every year a few kids are named after high-end designers, like Armani and Chanel.  Despite their luxury brand status, the names tend to feel a little forced.  Chances are that a kid destined to graduate from a Dior couture layette to Gucci toddler gear would never wear a name so obvious.

But your kid’s closet or the racks at the local baby boutique could serve as inspiration for a baby name.  Designers aplenty have launched pint-sized versions of their runway-worthy duds.  Equally intriguing are the names of the many labels launched to help us dress our kids in the latest fashions.

Ever since Elisabeth started writing her style column, I’ve been thinking: yes, the stuff is great.  But aren’t those names equally worthy of attention?

HANNA – Hanna Anderson has been bringing Scandinavian style to the states for years.

LILLY – Pulitzer, but also appearing in a long list of designers’ names, from Noa Lily to Kit + Lili

LOTUSGRACE – The label’s name is a smoosh, but Lotus Grace might be better worn as two separate names

PIPPA – Before she was sister to a princess, her name was part of the kids’ line Pippa + Julie

STELLA – As in mom of four, Stella McCartney

BODEN – British brand Boden fits right in with current trends in boys’ names.  Even if the clothing weren’t so great, kids would undoubtedly be wearing this one.

CARTER – The classic kids’ clothing line found everywhere, and the name has been a popular choice for boys since the 1990s

HARDY – As in Ed Hardy

HUDSON – The golf-inspired kids’ line Fore! Axel and Hudson matches a pair of appealing names that could work for brothers.

JOE – From Joe’s Jeans, which now makes denim for every member of the family, including jeggings for newborn baby girls

LEVI – From the iconic American jeans

MARC – Little Marc Jacobs is one of many lines

RALPH – Ralph Lauren is everywhere, but his name remains in fashion limbo

The names least likely to make your kids sound like a brand?  Any spelling of Lily, plus Gus, Paul, and Lulu.  None of them are so wedded to a label that they’d be tough to wear.

Have I missed any of your favorites?