Comic Book Names: The names behind the superwomen 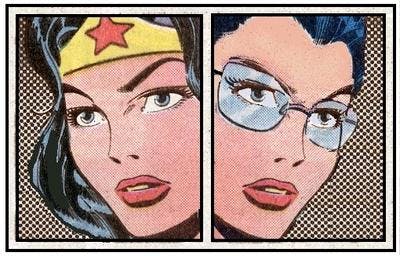 In her previous blog, Appelation Mountain‘s Abby Sandel revealed the alter ego names of the male superheroes, and this week it’s the girls’ turn.

Last week we looked at comic book names inspired by Clark Kent and Peter Parker – the mild-mannered alter egos of Superman and Spider-Man.

More women have donned a cape to fight for good than you might guess, but it hasn’t been an easy road.  The Comics Code Authority, a set of industry standards adopted in 1954, limited gore and violence, but also sexual innuendo.  Selina Kyle hung up her catsuit for more than a decade when the Code was at its strictest.

Female characters tend to go to extremes.  There’s the wholesome Betty and later Barbara, characters introduced as Batgirl at a time when it was thought Batman and Robin needed girlfriends.  Others are clearly not from this world, like Thundra, a Femizon warrior from the 23rd century, arrived in 1972 to challenge The Thing, or the first female superhero, Egyptian princess Fantomah.

As comic books have become popular sources for Hollywood films, plenty of A-list stars have worn these identities.  For parents seeking a feminine name with an edge, knowing that your daughter’s appellation has been worn by a crime-fighting woman of steel might make an otherwise frilly name seem downright powerful.  Here some possible female alter ego comic book names:

Evangeline – A lawyer who transforms into a red-winged dragon, also known as Vange

Jubilation – The character’s real name is close to her X-Men identity, Jubilee

Maya – Her given name is wildly popular.  Her secret identity, Echo, could also make for a very wearable choice

Ororo – The orphaned daughter of a princess, gifted with the ability to control the weather, Ororo has been famously portrayed in the X-Men film franchise by Halle Berry

Selina – Catwoman was a criminal, and Batman often set out to stop the jewel thief.  But she’s also one of the most popular female characters in comic book history

Wanda – Though it might be her alter ego, The Scarlet Witch, with the better name