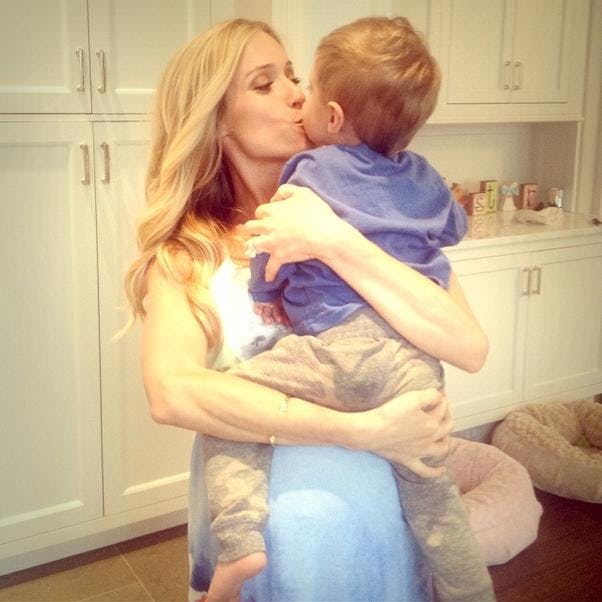 Not only did we have a bumper crop of high profile birth announcements last week, but the Social Security Administration also released the eagerly anticipated 2013 baby name data.

Sure, the US isn’t the only country to share statistics – and we’re kind of late to the party, since plenty of countries publish their lists earlier in the year.  But with the sheer number of newborns – just shy of four million – the US data is the mother lode.

Plenty of parents check popularity data when choosing their child’s name.  This week, it’s as if every model, athlete, actor, reality star, and musician seemed to agree: mainstream names are great, but maybe something just outside the Top Ten.

From Nashville to Hollywood, and even across to Europe, birth announcements shouted names that wouldn’t be out of place in almost any American kindergarten right about now.

Here are the most newsworthy baby names of the moment, plus how they compared to the new rankings.

Jaxon – It’s boy #2 for Kristin Cavallari and Jay Cutler.  When the happy couple welcomed their firstborn, they were right on trend.  Jay and Kristin chose Camden – only a few weeks before Nick Lachey and wife Vanessa used the same name for their baby boy.  Now Kristin and Jay have chosen another up-and-comer.  Surname name Jackson ranked #16 in 2013 – far more popular than former everyboy classic John.  Spelling variant Jaxon also charted in the Top 100, and Jaxson joined them both this year.

Wyatt – Kristin and Jay chose an equally popular middle for their new baby, though Wyatt held steady at #41 from 2012 to 2013.  He’s cowboy cool, thanks to lawman Wyatt Earp, and ‘t’ ending names – think Elliot and Beckett – are attracting plenty of attention lately.  I wonder if the couple struggled with which name to use, and ending up choosing their two favorites?

Alexander Frost – It’s a recipe for success: take a rock solid first name.  Add a completely unexpected middle.  Country music’s Zac Brown and wife Shelly chose a name for baby #5 that fits this pattern exactly.  Alexander has been a go-to name for years, and a Top Ten pick since 2008.  Nature name Frost is a surprise, one that works well for a boy and sparks up the expected first name.  Zac and Shelly are also parents to Joni, Georgia, Lucy, and Justice – a charming and eclectic sibset!

Maxim – Take Jaxon’s x, add Alexander’s history, and you have the Max names.  A few have slipped – Max is down – but others, like Maxwell, are still gaining.  Supermodel Natalia Vodianova chose a Max-name for her fourth child, her first with new boyfriend Antoine Arnault.  Maxim matches his half-siblings’ names nicely: Viktor, Neva, and Lucas.  It’s a pleasing quartet, each with a name that honors their Russian roots but wears well internationally.

Leo – We’ve talked about the Max-names.  Let’s move on to the Leos!  Leo keeps on climbing, from #134 to #112 in 2013, a happy, fierce combination of vintage charm and modern brio.  Longer forms, like Leonardo, Leon, Leonel, Leonard, and even Leonidas, chart in the US Top 1000.  Leo makes for an appropriately globe-trotting choice for the new son of Swiss tennis pro Roger Federer and his wife, Slovakian-born Mirka.

Lenny – Wait, make that new sons.  Roger and Mirka welcomed twins – again!  Big sisters are Charlene Riva and Myla Rose, born in 2009.  Depending on your perspective, Leo and Lenny are either great names for brothers – they’re both connected to Leonard and company – or maybe just a little bit too close.  This one is more nickname than name, and hasn’t cracked the US Top 1000 since the 1980s.  Still, he’s at home with Charlie and other casual, but stylish, choices.

Lenna – First Lenny, then Lenna! Three-time Survivor contestant and musician Benjamin Wade – better known as Coach – and wife Jessica gave this name to their new daughter.  The couple clearly has a thing for unusual names – Lenna Marie joins big brother Avvan.  Back in the 1880s through the 1910s, Lenna was a Top 1000 name.  Today she feels wearable, more interesting than the fading Jenna, a cousin to the Ella–Bella-Stellas and Emma-Gemmas.

Evelyn – Not so long ago, Bruce Willis was one half of the most daring baby naming duo in Hollywood.  Between 1988 and 1994, he and Demi Moore raised eyebrows with their trio of girls: Rumer, Scout LaRue, and Tallulah Belle.  Now Bruce and new wife Emma Heming are going a more conventional route with their names: first Mabel, and now Evelyn.  This name made it as high as #10 in the 1910s, and climbed to #20 in 2013.  Will she go higher still?

Penn – But Bruce and Emma aren’t playing it too safe – new daughter Evelyn has a tailored middle name, just like big sis Mabel Ray.  Amanda Peet has a Frances Pen, the middle a tribute to her mother, Penny.  With one ‘n’ or two, it’s a seldom-heard choice, but consider Penelope.  She jumped from #125 to #56 in 2013 – a huge gain, especially considering she didn’t even chart as recently as 1999.

How did your favorite names do in the 2013 rankings?  Do you think Leo, Jaxon, and Evelyn will keep climbing?