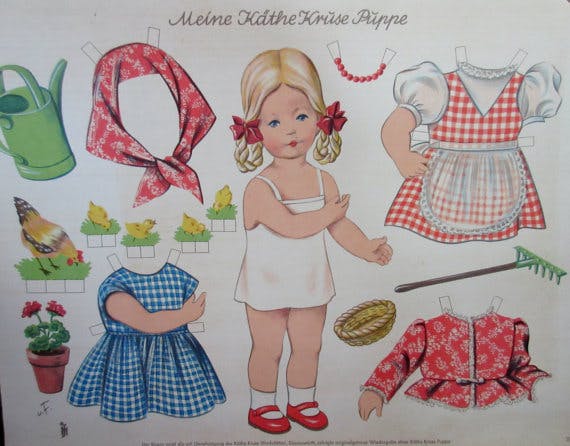 Many English-speaking countries have a history of high levels of immigration from Germany, and yet German names are not particularly common. This is often true even in families of German ancestry: I am of part-German descent myself, and my siblings and I do not have particularly German names, although readily understood in Germany.

There are such strong links between German and English that it is easy to assimilate and choose the English form of a name (George instead of Georg), and two world wars have strongly encouraged such assimilation. Some traditional German names now seem awkward and outdated, even in their country of origin – yet clunky names are beginning to come back into fashion, and there are also many sprightly German short forms of names with tons of vintage style.  Here are some examples of both.

AmaliaLatinised form of the name Amala, a short form of names beginning with the German element amal, meaning “vigour, courage”, with connotations of hard work and fertility. It is thus an older or more obviously German variant of Amelia. The name was traditional among German aristocracy and royalty, and is still used by modern European royals: Prince Félix of Luxembourg had a daughter named Princess Amalia last year. Just outside the German Top 100, Amalia is in the US Top 1000 and rising. It makes a good alternative to popular Amelia.

AnnelieseCombination of the names Anna and Liese, a short form of Elisabeth. The spelling Annalise is more popular in the English-speaking world, and is in the US Top 500 and rising. This name is very pretty, and would be a good alternative to popular names like Anna and Annabelle, while also suitable for honouring an Anne and an Elizabeth at the same time.

GretelPet form of Grete, short for Margarete, a German form of Margaret. It’s probably best known from the Grimm’s fairy tale Hansel and Gretel. In the story, Hansel and Gretel are brother and sister whose impoverished father and stepmother abandon them in the woods. The hungry children are caught by a witch once they start nibbling her yummy-looking gingerbread house, and Gretel rescues her brother from being eaten with cleverness and courage. Gretel seems like a cute yet sophisticated choice, a good alternative to trendy Greta.

LeniShort form of Helene or Magdalena. German supermodel Heidi Klum has a young daughter named Helene, who is called Leni. Leni is a popular name in Germany, and very much on trend, fitting in with cute short names like Ellie, and L names like Layla. The variant spellings Lainey and Laney are more popular in the US.

LuluPet form of Luise, the German form of Louise. Lulu is the main character in two plays by German playwright Frank Wedekind, often combined into one called Lulu; they inspired the silent film Pandora’s Box with Louise Brooks as Lulu. In the stories, Lulu is a prostitute and femme fatale. Lulu is often chosen as a stage name, such as the Scottish singer Lulu (born Marie Lawrie), but singer-songwriter Lulu Simon, daughter of Paul Simon, has Lulu as her full name. A popular name in the 19th century, little Lulu is a cute, sexy name that gives Lola a run for its money. Can be used as a nickname for any name with a Lu sound in it, from Lucinda to Eloise.

MitziPet form of Maria. It’s more often chosen as a stage name, such as Hollywood star Mitzi Gaynor (born Francesca Gerber), and child star Mitzi Green (born Elizabeth Keno), who was in the 1932 version of Little Orphan Annie. In Germany Mitzi is more popular for cats and dogs than humans, and in the US it has not charted since the 1970s. However, itsy-bitsy Mitzi is a bright vintage charmer that will appeal to those wanting something a little different while still fitting in with current trends.

OttilieModern form of the ancient Germanic name Odilia. This is often said to be a feminine form of Otto, but may actually be from the Germanic odal, meaning “fatherland”. The name has been something of a favourite in fiction, being chosen by the authors Goethe, Truman Capote, John Wyndham, and Robert Louis Stevenson – in all these works, the woman named Ottilie is an object of desire. Last charting in the US in the early 20th century, Ottilie is in the UK Top 1000 and rising fast. This is an upper-class and and ultra-hip name which has Tilly as the obvious nickname.

TheaShort form of Dorothea or Theodora. Just outside the Top 100 in Germany, Thea is popular in Scandinavia and New Zealand, and rising sharply elsewhere in the English-speaking world, having made the US Top 1000 last year for the first time since the 1960s. It’s short and simple, yet somehow substantial.

WilhelminaFeminine form of Wilhelm, the German equivalent of William; in the form Wilhelmine, this was a traditional name amongst German royalty. Wilhelmina hasn’t charted in the US since the 1950s, but now seems cool rather than clunky. Dignified yet quirky, Wilhelmina has a host of adorable nicknames, including Billie, Willa, Mina, Minnie, and Minka.

ZellaShort form of Marcella, a feminine form of the name Marcus. Zella peaked in the 19th century, when it fit in with other names from that era, such as Zelda and Zelie. Today it sounds like Zoe + Ella – a vintage name which now blends in seamlessly with current trends.

Waltzing More Than Matilda is the creation of Anna Otto, who blogs about a wide variety of Australian names, and Aussie name trends.

View all of WaltzingMoreThanMatilda's articles