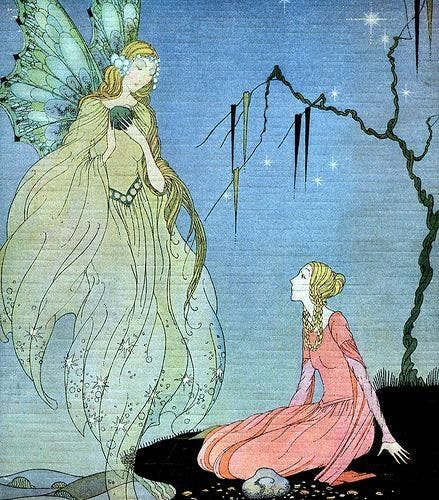 Many people search for unique baby names in their favorite stories, and unique fairy tale names are among their favorites. We grow up hearing these stories, watch the movies that are based on them, and read them to our own children. The name options below come from lesser-known fairy tales. Perhaps you’ll find a new gem and with it a new story to tell your children.

Aimee – From the French story Aurore and Aimee. This alternative spelling of Amy meaning “beloved” has long had a presence here: it peaked in the US in the 1970s, when Amy was at its height of popularity. Its most famous bearer is singer Aimee Mann.

Aurore – Also from Aurore and Aimee. This is the French version of Aurora meaning “dawn.” Aurora was the Roman goddess of the sunrise, a Disney princess, and is the name for the northern lights. It’s a beautiful and unique fairy tale name with the spunky nickname Rory for girls who want to escape the princess feel.

Emilienne – From the French story Father Roquelaure. Emilienne is a Gallic elaboration of the classic Emilie, which is currently Number 867 in the US and currently even more popular in Scandinavia than in France—it’s now at Number 5 in Norway and 25 in Denmark. If you’re looking for something more elaborate than Emily, Emilienne is a good choice.

Finette – From the French story Finette Cendron. This offshoot of Josephine is an interesting take on a popular name. It’s simple but sweet and has plenty of nickname potential. Just different enough to stand out but still perfectly usable.

Florine – From the French tale The Blue Bird. Florine was actually a US Top 500 name at the beginning of the 20th century, reaching 329 in 1921. Like Finette, it’s delicate, but the Fl- sound at the beginning gives it a degree of strength.

Helga – From the Icelandic story Habogi. Helga is a strong name meaning “prosperous, successful” that is commonly heard throughout Scandinavia, Holland and Hungary. While some parents might find this name a little much, it has a lot of solid history, and also was used in the Harry Potter books.

Signy – One of the mythological names from the Icelandic story Asmund and Signy. In Norse mythology, Signy, which means “new victory,” was the name of two princess heroines. Also spelled Signe, it’s short, appealing, and a unique fairy tale name that stands out.

Vasilisa – From the Russian story The Firebird and Princess Vasilisa and also seen in the novel The Vampire Academy, Vasilisa is a Russian female form of Basil. More unusual than some of the others on this list, it could make a charming middle name.

Alidor – From The Dolphin. This is the name of an unattractive but very kind and intelligent prince in a French tale. The name has an unknown meaning, but it fits in with those with similar sounds like Theodore and Isidore.

Cassim – From Ali Baba and the Forty Thieves. Cassim was the name of Ali Baba’s brother. It a form of Qasim, meaning “charitable, generous.” Qasim was also the name of Muhammad’s son. Both versions have exotic flare but could wear well on anyone.

Conall – From the Scottish tale Conall Cra Bhuidhe. Conall is a handsome name meaning “strong as a wolf.” It’s the perfect substitute for Connor, which has gotten popular enough to be in 54th place.

Emilien – From the French story Father Roquelaure. Emilien is a prince who rescues a princess from a tower. It’s a handsome, if somewhat soft, name meaning “friendly.” A variation of the French Emile, it has a lot of potential but might get lost among all the girls named Emma and Emily.

Esben – From the Danish story Esben and the Witch. Esben is a clever character with a strong name meaning “bear.” Though it’s an unusual name, it has a familiar sound and would be easy to spell. The biggest issue I can see is that it could be mistaken for Aspen.

Ferdinand – From the German story Ferdinand the Faithful and Ferdinand the Unfaithful. Ferdinand is a strong royal and Shakespearean name meaning “bold voyager” which, unfortunately, can feel a little clumsy to the English tongue. There have been Ferdinands on NYPD Blue and Orphan Black. Ferdinand was a Top 250 name at the turn of the last century, but dropped off the list in 1971.

Hans – From the German story Clever Hans. Hans is a familiar old world name, a diminutive of Johannes, particularly apt for its fairy tale connection to Hans Christian Andersen. Prince Hans is a character in Frozen.

Ivan – From the Russian story The Death of Koschei the Deathless. Ivan is a timeless Russian name, a variation of John, meaning “God is gracious.” This name is easy to pronounce, wears well, and has a long history in English-speaking countries. It now ranks at Number 138 in the US and Number 30 in Spain.

Jesper – From the Scandinavian story Jesper Who Herded the Hares. Jesper, pronounced more like yes-per, is the Scandinavian version of Jasper and would almost certainly be confused with it. If you have Scandinavian heritage, it might make an interesting middle name.

Sigurd – From the Icelandic story The Horse Gullfaxi and the Sword Gunnfoder. This is my favorite on the boys’ list. From the Olf Norse name Sigurðr, which was derived from the sigr “victory” and varðr “guardian.” Sigurd was the hero of the Norse legend the ‘Volsungasaga’, which tells how his foster-father Regin sent him to recover a hoard of gold guarded by the dragon Fafnir. Siggy as a nickname makes this name more accessible to English parents.

Angel Thomas, better known on Nameberry as Dantea, is a stay-at-home mom with a passion for onomastics who writes fantasy novels in her spare time. Her knowledge of Greek names stems from her ancestry and her religion.

View all of Dantea's articles