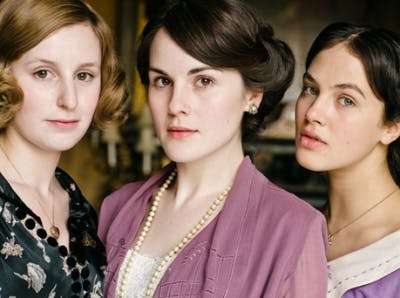 At last, at last, the third season of Downton Abbey has finally launched, a further opportunity for those of us who love vintage British names to spend time with the Crawley clan et al.  We’re now lucky enough to have had two recent TV period imports with great examples of character names, both for the aristos upstairs and the servants below.  The time frame of both Downton Abbey and the recently updated Upstairs, Downstairs is the early decades of the twentieth century: Downton now picks up in 1920; the second series of Upstairs in 1936, six years after the initial one ended.

And if there seems to be a preponderance of girls’ names, it’s because so many of the male characters, both upstairs and down, have such common names as Thomas, Robert, Matthew, William, Joseph and John.

Here are some of the most interesting names in both series; and it’s worthy of note that the British TV names that are being revived today come equally from both social strata, as in, for example, Isobel and Ivy, Edith and Elsie.

For a look back at the original 1971 -75 Upstairs, Downstairs series, which spanned the years from 1903 to 1930, here are some of the Upstairs names used:

And then there are the surnames, heard on the three series, that might be conceivable firsts:

Do you think any of these names have influenced baby naming?  Could the lovely Lady Mary (Michelle Dockery) help revive the name Mary?  What’s your favorite upstairs and downstairs name?