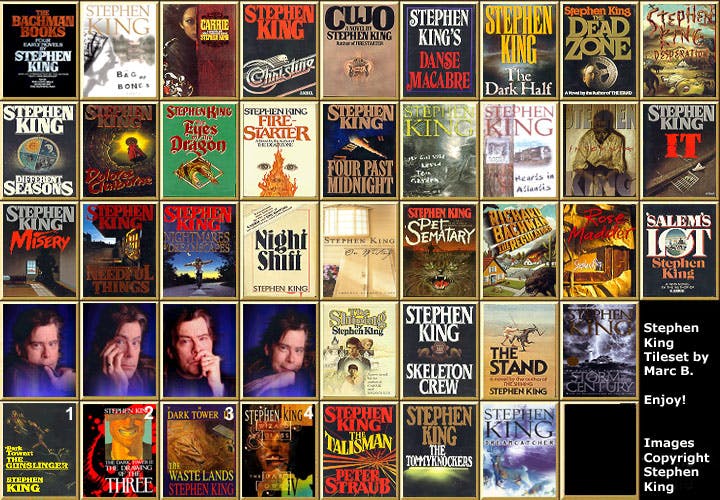 I vividly remember sneaking peeks at my father’s Stephen King books when I was way too young for them, but I could only steal them away long enough to finish one of the short stories.  I recall hiding in the bathroom and reading one called Sneakers from the Nightmares & Dreamscapes collection.  I’m still traumatized by that imagery!  I urge you to find it and read it if you enjoy being terrified.  Stephen King also gave me my first scary movie, Pet Sematary, which provided me with my first name crush and simultaneously destroyed it with Gage.  He also made me misspell the word cemetery for about a decade, but that’s all forgiven because he’s a pretty great character namer. For example:

Carietta– Stephen King‘s first published novel was Carrie.  It went on to become a film, a musical (really!), a sequel film, a TV movie and a film again–the reboot is in theaters now.  As enduring as Carrie has been, few people know that the character’s full name is Carietta, a feminization of Carl or Charles with Germanic roots.  This name is outside the top 1000, yet feels familiar enough to use.  Nickname Etta feels more 2013, and less doused in pig blood.

Winnifred-”Are you a Winnie or a Freddie?”  Dick Halloran asks Jack Torrance’s wife in the Kubrick version of The Shining, and when she replies “Wendy,” he says, “Oh that’s nice.  That’s the prettiest.”  I prefer Winnie personally, but the character Wendy Torrance is an intriguing one.  In my opinion, Shelly Duvall did a great job depicting a terrified, isolated woman.  Stephen King wasn’t that impressed with the film depiction of Wendy though– he found her to be misogynistic and lacking depth, “just there to scream and be stupid”…Well, it is a horror movie.

Christine– It’s hard to make an argument for the name Christine when talking about the novel and movie in which Christine is the name of a car possessed by a vengeful spirit, but really, I am surprised that the name seems to get overlooked.  It’s so classic, yet falls outside of the top 500.  The male equivilant, Christopher, is much more enduring.  I’ve always wondered why.

Misery–  Misery Chastain is the main character of the romance series written by novelist-cum-hostage Paul Sheldon in the book and film, Misery.  Couldn’t be a more perfect name considering the character causes the writer so much, well, misery.  This is a great example of how unusual word names can sometimes be unusable because of their meaning—even if they have a pretty sound. Meaning matters!

Abra–  Stephen King‘s latest novel, Doctor Sleep, is a sequel to The Shining.  The book catches up with a now middle-aged Danny Torrance.  He befriends a young girl named Abra Stone who also has the “shining”.  I like it pronounced Abe-ruh, making it less reminiscent of magicians.

Gage–  Since Pet Sematary was my first scary movie, the name Gage will always be connected to the creepy little undead son of Louis and Rachel Creed. That doesn’t mean I don’t still love the name though!  Gage’s sister’s name isn’t so bad either, Eileen, nickname Ellie.  Even their cat, Winston “Church” Churchill is wonderfully named!  Also neighbor, Jud.  And long-dead sister of Rachel, Zelda.  I think I have to rewatch this movie and pause it to read the pets’ gravestones!

Malachi-The Children Of The Corn movie series is a treasure trove of underused biblical names.  The original short story in Stephen King‘s Night Shift collection featured characters named Malachi, Ruth and Isaac.  The names get more interesting and rare as the series goes on.Leland–Leland Gaunt is the proprietor of a shop called “Needful Things” in the book by that name.  He is also probably the devil.  Or maybe a demon.  But Leland is still a pretty great name despite the character who pits the various townspeople against each other.  Some of his pawns have great names too.  My favorites include Norris, Ace, Netitia “Nettie,” Wilma and Myrtle.

Brutus– As in, Brutus “Brutal” Howell, one of Paul Edgecombe’s fellow guards in The Green Mile.  Not all Stephen King works are purely frightening and not all people named Brutus are brutal.  But the name does mean “heavy” and “dull” and does have that Julius Caesar “Et tu, Brutus” association, so probably not be the best choice.

Strickland– In Bag of Bones, the main character, Mike Noonan gives this name to little Kyra‘s toy dog.  She ends up calling him “Stricken” so maybe this isn’t the most wearable choice, but it is a rare surname name which goes along with the present trend.  I find the -land ending more interesting than -son names.

What are your favorite King novels and character names?  Does his work make you as nostalgic as it makes me?

Tara Ryazansky is a freelance writer who has a fashion background.  She has worked for Jane Magazine, Teen Vogue, Interview Magazine and Ellegirl.com.  Find her in the Nameberry forums under Tararyaz.

Tara Ryazansky is a freelance writer who has a fashion background. She has worked for Jane Magazine, Teen Vogue, Interview Magazine and Ellegirl.com. Find her in the Nameberry forums under Tararyaz.

View all of tararyaz's articles