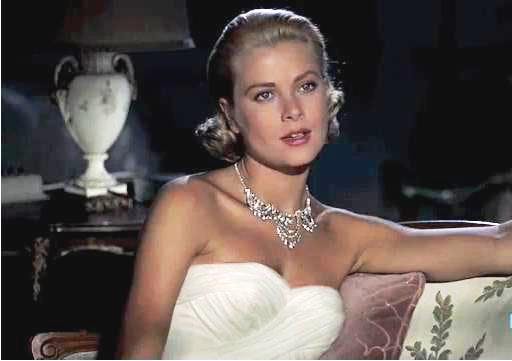 Alfred Hitchcock, often referred to as the “Master of Suspense,” worked with forty-seven lead actresses in his five decades of filmmaking, many of them evidence of his penchant for cool blondes. Let’s explore seven of his most memorable leading ladies.

Eva Marie Saint won an Oscar for her performance in On the Waterfront, though her role of Eve Kendall in Hitchcock’s North by Northwest is arguably equally iconic. Eva is a Latin form of the biblical name Eve, meaning life. Currently ranked at Number 75, Eva hasn’t been this popular since the mid-1920s; it ranked at Number 66 in 1924, the year Saint was born. Eva had peaked in popularity in 1900 at Number 33.

The epitome of elegance, Grace Kelly starred with James Stewart in Rear Window, one of Hitchcock’s greatest films, as well as in the director’s Dial M for Murder and To Catch a Thief. Grace Kelly truly lived up to her virtuous name, which connotes elegance and refinement. A popular name in the early 1900s, Grace regained popularity in the late 1990s, both as a first and middle name. Today, Grace ranks at Number 19; it was Number 54 in 1929 when Kelly was born and peaked in 2004 when it reached Number 13.

Legendary beauty Ingrid Bergman starred in some of Hitchcock’s most acclaimed films. One of her best remembered roles is co-starring with Cary Grant in the thriller Notorious. Bergman also starred in Hitchcock’s Spellbound and Under Capricorn. Ingrid is an Old Norse name that remains a Scandinavian classic. Currently Number 957, Ingrid was not in the Top 1,000 in the US in 1915 when Bergman was born in Sweden. Ingrid peaked here in 1967, reaching Number 380.

Janet Leigh’s appearance in Psycho made her one of Hitchcock’s most famous leading ladies. Though her role was brief, Leigh’s shower scene became one of the most famous in cinematic history. Janet , a medieval diminutive of Jane, fell out of the Top 1000 in 2012, though it ranked at Number 112 the in 1927 when Leigh was born. It reached as high as Number 16 in 1938.

Joan Fontaine’s first Hitchcock film was Rebecca and she was the only actor, male or female, to win an Academy Award in a Hitchcock film, for her role in Suspicion. Joan is a medieval form of Johanna meaning God is gracious. Joan is a generational name, seen more these days on grandmothers and great-grandmothers. Joan was last in the Top 1000 in 1993, having ranked at Number 182 in 1917 when Fontaine was born. Joan reached its peak in 1933 when it was Number 5.

Kim Novak’s most acclaimed work was for her role in Vertigo. Hitchcock cast her as a replacement for Vera Miles, who had to leave the film when she became pregnant. Kim is an English diminutive of the place-name Kimberly. Modern parents may prefer other ‘Kim’ names like Kimber or Kimball. Kim left the Top 1000 in 1992, and was not in the Top 1000 in 1933 when Novak was born (though her birth name Marilyn was #16). Novak more than likely helped Kim gain attention as it would peak in 1960, two years after the release of Vertigo, when it reached spot Number 34. The name Kim is now strongly associated with Kim Kardashian.

Tippi Hedren was the last of the classic Hitchcock leading ladies, starring in the legendary film The Birds. Hedren also starred alongside Sean Connery in Marnie, considered to be Hitchcock’s last great film. Tippi is a nickname that Hedren received from her father; it has never ranked in the Top 1000 though her given name, Nathalie is currently Number 652 and was Number 828 in 1930 when Hedren was born. Nathalie is a variant spelling of Natalie, a name associated with Christmas. Nathalie peaked in 1998 reaching spot Number 446. Tippi could be a quirky and fun nickname for Tabitha, Tiffany, or Topanga. Character name Marnie is seeing a return.

Which of these Hitchcock leading lady names do you like best?

Meagan, also known as TulipByAnyName, is an artist, a vlogger, a blogger, and of course a baby name enthusiast! She loves exploring everything from literary names to celebrity baby names. You can hear her talk about names on her YouTube channel www.youtube.com/user/tulipbyanyname or visit her blog www.tulipbyanyname.com. \n

View all of Meagan's articles