How I Named My Baby: Morris Oliver 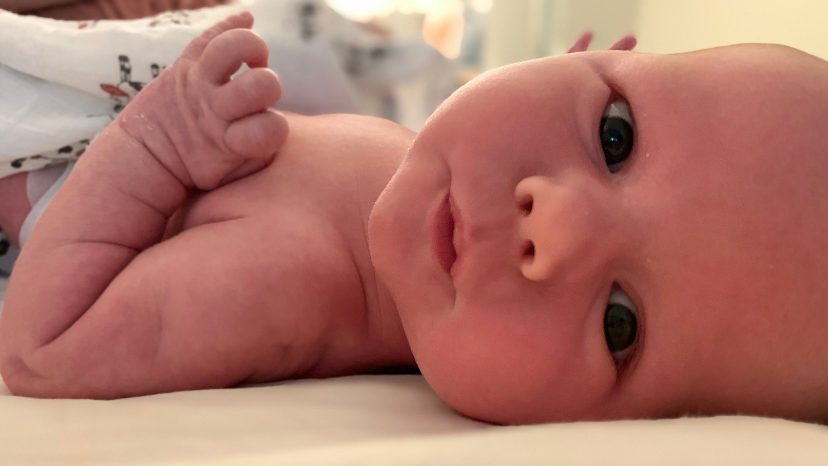 Taylor Olsen, a stay-at-home-mom, and Ben Olsen, who works in tech ethics, live in the Seattle area with their two children. Their son Morris Oliver was born this past April, a brother for Martha Frances.

We chatted with Taylor about family names, crusty-cool style, and how she and Ben chose the name Morris for their little boy.

Tell me about how you named Morris!

I feel like both times we needed all 40 weeks to decide on a name — Martha was two weeks late, so in her case, 42 weeks. I’m someone who has a lot of opinions about names. I love talking about and researching names. It ended up being an intuitive process both times, where the name just came to us and felt right.

For a long time with Martha, we thought we were going to name her Josephine. We thought about Frances as a first name. Maybe I just go way overboard and think and talk about names too much. I just get tired of all of the names that are commonly used or on-trend.

Part of me was thinking we’d probably go with a pretty classic boys’ name for Morris. My husband Ben’s middle name is Peter, and I was obsessed with Peter Pan as a little girl — I used to tell people my name was Peter Pan — so that was always a favorite name of mine. I loved the idea of using it in honor of Ben, but it just wasn’t quite clicking. And this was about two weeks before Morris was born!

What about Peter felt off?

I’m wondering if I’ve just known too many people named Peter. As much as I love it — it was the only boys’ name I liked as a little kid. I was a name nerd kid — I used to write long lists of girls’ names and the boys’ list would be “Peter.”

We were under a little bit of family pressure from Ben’s parents. They wanted him to have a junior, but it wasn’t going to happen. I think they know us well enough to know that they could say that, but we were most likely going to ignore it.

We talk about names with everyone and we’re just hard-headed enough to ignore other peoples’ opinions if they interfere with our choices. I think you just have to know yourself and if you’re comfortable doing that or not. We really enjoy talking about names, so we do it.

Even though Ben kind of liked the idea and thought it would be nice. We obviously weren’t going to call him Ben Jr. or BJ, but he liked the idea of Peter. After some time, he was feeling that he wanted our baby to have his own name. I had to agree that that was better, too.

So how did you get to Morris?

Morris is actually my maiden name, which is really fun. I ended up taking Ben’s name and axing my maiden name — something I was always very conflicted about. This felt like the perfect way to rectify that!

My name, Taylor, is my grandma’s maiden name as well, so it’s kind of a family tradition. My parents had no idea they were being super trendy when they named me! Their thinking was, “this is going to be sort of different, but we really like it!” Famous last words.

I always advocate for that — if there’s a family surname that works as a first name, add it to your list! And Morris works so well with Martha — these vintage names!

I was so happy it worked out that way. I guess that’s another thing about our other boy choices — I really wanted a name that gave me a nice sibling set. Martha is seven and we weren’t sure if we were going to have another baby, but I really wanted to have a sibling set! If we had the opportunity to add another name, I wanted to feel good about it.

I had some hesitation about doing the two Ms. My slight preference going into it was to have different initials, but now I actually really like it! Especially because Martha is seven years older than him — it’s not like they’re going to be the most matched set of siblings, so I like that they have the same initial. It’s a good tie-in.

We kind of had to sell Martha on it because she really wanted to name the baby Teddy. We had been entertaining that for a while, too. Theodore goes well with Martha — it makes it a more classic sibset. And the nickname Teddy is really cute. She had the intuition that it was a boy — very early on she told me, “I think it’s a boy, and I want to name him Teddy!” All the heart-eye emojis.

Did she come up with Teddy herself, or was it one that she heard you throw out there?

She heard it first in Harry Potter because her favorite character is Nymphadora Tonks, who has a son named Teddy. I’m pretty sure that’s where Teddy came from, though, of course, it’s very much in the air as well.

Did Martha have any other suggestions?

She really wanted Teddy but went through a really brief moment where she was like, “Boot would be a great name for the baby. Let’s call him Boot!” She got diverted from Boot when she got a new doll and named it Boot instead.

Now that he’s here and he’s named, she likes coming up with her own little nicknames for him. She’s been calling him Olive and she also likes Moomoo. Anything cutesy!

When did you know Morris was “the Name?”

At the very end, we were thinking Peter, Theodore, and a bunch of other random ideas. We thought maybe there was a fun middle name we could do with Peter — Peter Florian sounds cool! We were trying to get excited about them.

The clincher is that I’m a big fan of the Duana Names column and she suggested Morris to someone. I was like “oh, yeah, that’s a name! We could do that — we could use Morris as a name.”

Ben loved the Nameberry suggestion of using the nickname Moss. We haven’t really tried it out yet, but maybe when he’s older! We’ve been calling him Morris or Mo or Momo. But that was another factor in making Morris more appealing.

I really liked the idea of bringing in my side of the family. My kids have Ben’s family’s last name, and I’m definitely of the camp that you should have more say in kids’ names if they don’t get your last name.

Were you settled on Morris’s full name going into the birth?

Maybe two days before. We thought about Morris Theodore, you know, Morris plus Martha’s favorite name. I thought that was cute — I liked the idea of giving her a little say. But it’s kind of hard to say with Olsen.

We liked the idea of a longer name in the middle — Ben thought of Alexander. He didn’t remember this when I brought it up, but I remember him mentioning the name Oliver in the past. I was always like, “No, Oliver Olsen is literally straight out of a children’s book.” I do love alliteration, but that’s a lot for a first name.

But we still liked how Oliver sounds with our last name. Both Morris and Martha are family names and I wanted to pull something out and choose something fun and random.

Tell me about the MOO initials!

At first, I wondered if it was a good idea, but Ben is the type of person to embrace the fun, random aspects of names. I’m a little more anxiety-prone about certain things and tend to overthink stuff. In this case, I ended up coming around and deciding that it was fun and that we were going to go cow-themed with the stuff we still needed to buy for his nursery. I bought him a little cow and a cow hamper.

Martha has maybe 18 nicknames and we tend to call each other all sorts of things throughout the day. We have a big nickname culture and play on our given names endlessly. We liked the idea of Moo being a nickname possibility.

How do you feel about being named Taylor, and how do you think that influenced your choice of baby names?

I didn’t really like my name. Most of the Taylors growing up were boys, which I was not a fan of. I also didn’t like that it felt trendy and time-stamped. I wanted to avoid a time-stamped name and choose something more international. Whenever I travel abroad, people tell me Taylor sounds so American!

When I was naming Martha, I thought about the types of names I’d want. I would definitely want a feminine name, but not one that feels decorative or overly elaborate. I remember a girl in one of my college classes named Ruth, and I just thought that was the best name. I wished my name was Ruth! I like names that aren’t “back” yet — there’s something cool about them.

Did you ever talk about girl names during this pregnancy?

I have a huge soft spot for the name Rose, but I was never quite sure about Rose Olsen. I also love Jane, but Ben doesn’t as much. If we had another girl, it would have been fun to go further out there in terms of a more unusual name. Althea is really appealing to me — I love the “th” sound. One of my favorites as a kid was Cecily. I wouldn’t want to have the plain name and the fancy name, so we’d choose something that’s still unusual but goes with Martha.

What are some of the trendy names in your social circle?

We know multiple Vivians and Jacks. A lot of the names that are pretty common. There are actually a lot of Franceses! Among people I went to college with, there is a love of the name Frances. I have a group of girlfriends who will go out together, and I have a Martha Frances, one has a Lucy Frances, and the other has a son named Frank. I also know a couple of girls named Frances who go by Frankie.

Do you have any fears related to baby names?

I felt like we were somewhat daring with Martha’s name, so not really! I’m not worried about name teasing — I don’t think that’s so much of a thing anymore.

I guess you worry that there could be some kind of association that crops up later on, especially with less common names. I don’t love the whole Handmaid’s Tale thing with Martha. But you just can’t control that.

What advice would you give to someone starting the baby name process?

Go for broke! You just don’t know what your fertility journey is going to look like. Don’t be afraid and have fun. I’m really happy I went with the more unusual choices on my list. Naming should be a rich tapestry and you should add to name diversity if you feel drawn to that.

Thank you so much, Taylor!