Bold B-Names and Beyond: Booker, Bowie, Bridget and Bijou 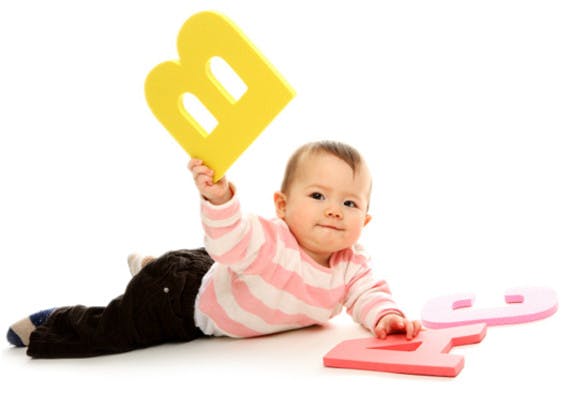 Brian is your brother-in-law, Bill’s your uncle, and Barbara is your mom.  But could B be the new letter to watch for baby names?

Up until recently we were all mad for Aiden and Ava, Amelia and Alexander.  A was the most popular letter for girls’ names, the second most popular for boys, and a resounding #1 overall.

Of course, B hasn’t been in the shadows.  You probably know kids called Benjamin and Brayden, Brooklyn, Brianna and Bella.  They’re all Top 100 choices. Up-and-comers like Beatrix and Beckett are on the favorites list of many a future parent.

Still, it was a surprise to hear four great B choices in the news this week, all of which could catch on.  They were mixed in with lots of intriguing names: a vintage romantic, a pair of Hollywood glam surnames, and a handsome Greek god.

Here are the baby names in this week’s news, brought to you by the letter B and beyond:

Bridget – Pregnancy guru Rosie Pope has welcomed baby #4, and it’s a girl!  Bridget Monroe joins James Roderick – J.R., Wellington Reade – Wells, and Vivienne Madison.  Unlike the very stylish Vivienne, Bridget is more of a solid choice.  She’s an Irish saint and an ancient goddess, and while she’s fallen into the 400s, after peaking just outside the Top 100 in the 1970s, Bridget doesn’t quite feel like a mom name.  Instead, she seems right on trend with Violet and Juliet, a logical sister for Vivienne.

Monroe – All of the Pope kids get their middle names from streets that their parents have called home.  When I hear the girls’ middles, it makes me wonder if Monroe is the new Madison.  Between the iconic Marilyn, Mariah’s darling daughter, and Rosie’s new arrival, we’re certainly hearing a lot of this name.  With that bright ‘o’ ending, Monroe fits right in with Harlow, Marlowe, and many other possibilities.

Philomena – Great names must run in the family!  Dr. Mehmet Oz’s daughter Daphne is a new mom.  She’s also co-host of ABC’s cooking/talk show The Chew, and it turns out that the elaborate, vintage Philomena has a foodie connection.  Daphne and husband John Jovanovic have nicknamed their little girl Philo, like the dough, or PBJ, for her initials.  Philomena’s profile is certainly up these days, thanks to Judi Dench’s Oscar-nominated turn as the star of Philomena.  Proof that the name works on a girl as well as a grown woman.

Bijou – I mentioned that Philomena’s initials are PBJ, and what a daring, glittering middle indeed!  More surprising than Pearl, less familiar than Ruby, the gemstone-inspired Bijou has more history than you might guess, but remains a rarity.  She adds quite a bit of sparkle to the gently vintage Philomena.

Apollo – The first name of the newest Stefani-Rossdale is definitely a celeb-worthy pick, a smidge more daring than Kingston, not quite as surprising as Zuma.  Sharing your name with a handsome immortal might be a lot for the average kiddo, but something tells me that Gwen and Gavin’s kid will have the swagger to pull off this larger-than-life appellation.

Bowie – Gwen and Gavin chose family names for their new son’s middles – and what great family names they are!  Bowie feels like a logical successor to Lennon and Jagger, Hendrix and Cash.  A handful of baby Bowies are out there – 24 boys were given the name in 2012, along with 21 girls.  Presumably some of their parents were inspired by the legendary David Bowie.

Flynn – As if Flynn needed any more buzz, this is Apollo Bowie’s second middle name, also borrowed from the family tree.  He’s a twist on the very popular Finn, and conjures up the swashbuckling charm of old Hollywood’s Errol Flynn.  Plus this one has the Disney stamp of approval: in Tangled, tower-bound princess Rapunzel and Flynn Rider set off on an adventure together – though we eventually learn that his real name is Eugene.

Booker – If you’re named Thandie, your husband is Ol, and your girls are Nico and Ripley, what do you name a boy?  I think Thandie Newton and her director husband Ol Parker nailed it with Booker.  It’s an unexpected choice, one that brings to mind late nineteenth century civil rights activist Booker T. Washington.  Booker is literally literary, and seems at home with all of those ends-in-r names for boys – Carter, Asher, Archer, Hunter, Connor.

Jombe – How about Booker’s middle?  I’m guessing that Jombe comes from the Swahili word jumbe, for chief.  Mom’s full name is Thadiwe, and her mother is from Zimbabwe.  That’s not exactly where Swahili is spoken, and Thandie was born in London.  Unless the happy couple shares in an interview, I’m not sure I’ve got the origins for Jombe just right.  But he does have an upbeat, interesting sound that makes Booker feel less buttoned-down.

What are your favorite B names?  Would you consider Bridget, Bijou, Bowie, or Booker for a child?