A Celebrity Mom Talks About Her Surprising Name Choice 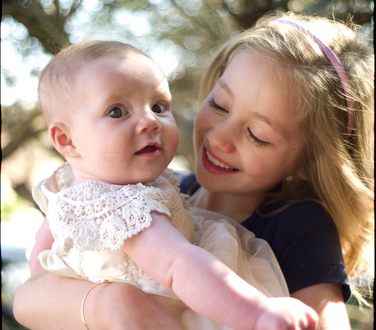 In her second blog for Nameberry, celebrity mom and name lover Natalie Hanson, who has five children with musician husband Taylor, reveals how and why they chose the adventurous Wilhelmina for their second daughter’s name.

Hello Berries! Last time I wrote to you, I shared that I was expecting a little girl and that we were searching for her perfect name. Our daughter arrived in October, and we named her Wilhelmina.  Wilhelmina is a form of William, which means “resolute protection”.  Right now I am so in love with this strong and beautiful name, and even more in love with the girl who bears it!

The story of Wilhelmina’s name starts in October 2010, two years before her arrival, when I came across the name Wilhelmina on a Nameberry list!  My first impression of the name was how strong it sounded. It was like the “Isabella” you wouldn’t want to mess with.

I decided to pass the name along to my sister-in-law, Jessica, who is a fan of strong, Germanic-warrior sounding names. Jessie appreciated the suggestion and told me it reminded her of Willa Cather, the author of Oh, Pioneers!, a book she had read a few years before.  Her choice of books did not surprise me, as I have always thought of Jessie as a sort of “pioneer woman”.  She is one of the strongest, hardest working, most loyal women you could ever know.

Later on when I was telling my husband Taylor about my exchange with Jessie over the name, Wilhelmina, he immediately professed a real liking for the name himself.

“Really?!” I had to process for a minute. I’d only thought of the name for Jessie and had absolutely not considered it as one we might use.

However, he was right. It was a beautiful name.  It was clearly feminine, with quite a heritage, and a plethora of pretty nicknames to choose from.  These were all qualities I appreciated in my first daughter’s name. I began to think Penelope might have met her match!

Over the next year or so the name hung around as one we were both fond of, and when we found out we were expecting a little girl, it seemed the perfect choice. Wilhelmina sounded lovely as a sister to Penelope, and, in a way most wouldn’t recognize, she would be named for her dear Aunt Jessie.

Wilhelmina. It was settled. She arrived and being the name enthusiast I am, I proposed we hold off on a nickname commitment until everyone was acclimated to the name in its full glory.  It wasn’t long before I got a call from Taylor’s mother, telling me she was having a Christmas gift monogrammed, and “Wilhelmina” just wouldn’t fit. I decided to go with Willa.  It is ode to the Oklahoma pioneer spirit, and the symmetry to Penny is the icing on the cake!

Although Wilhelmina isn’t a very popular choice, I have yet to get the “Huh?” response, like I did with Viggo, my youngest son’s name. It seems to hold some sense of familiarity with people. So far, all of her siblings and little cousins have had no trouble saying her name. I think the spelling is a little intimidating for some, but in speech, the sounds are fairly simple.  We all think Wilhelmina is wonderful, and I hope you do, too!