The Spellings of Classic Name Katherine

How have each of these spellings fared over the years in comparison to each other as well as to other spellings of the name? The graph below shows each spelling’s percentage of use from 1938 through 2013. (My database only has the percentage of use information from 1938 onward because the raw data from the SSA is not available prior to that year.) 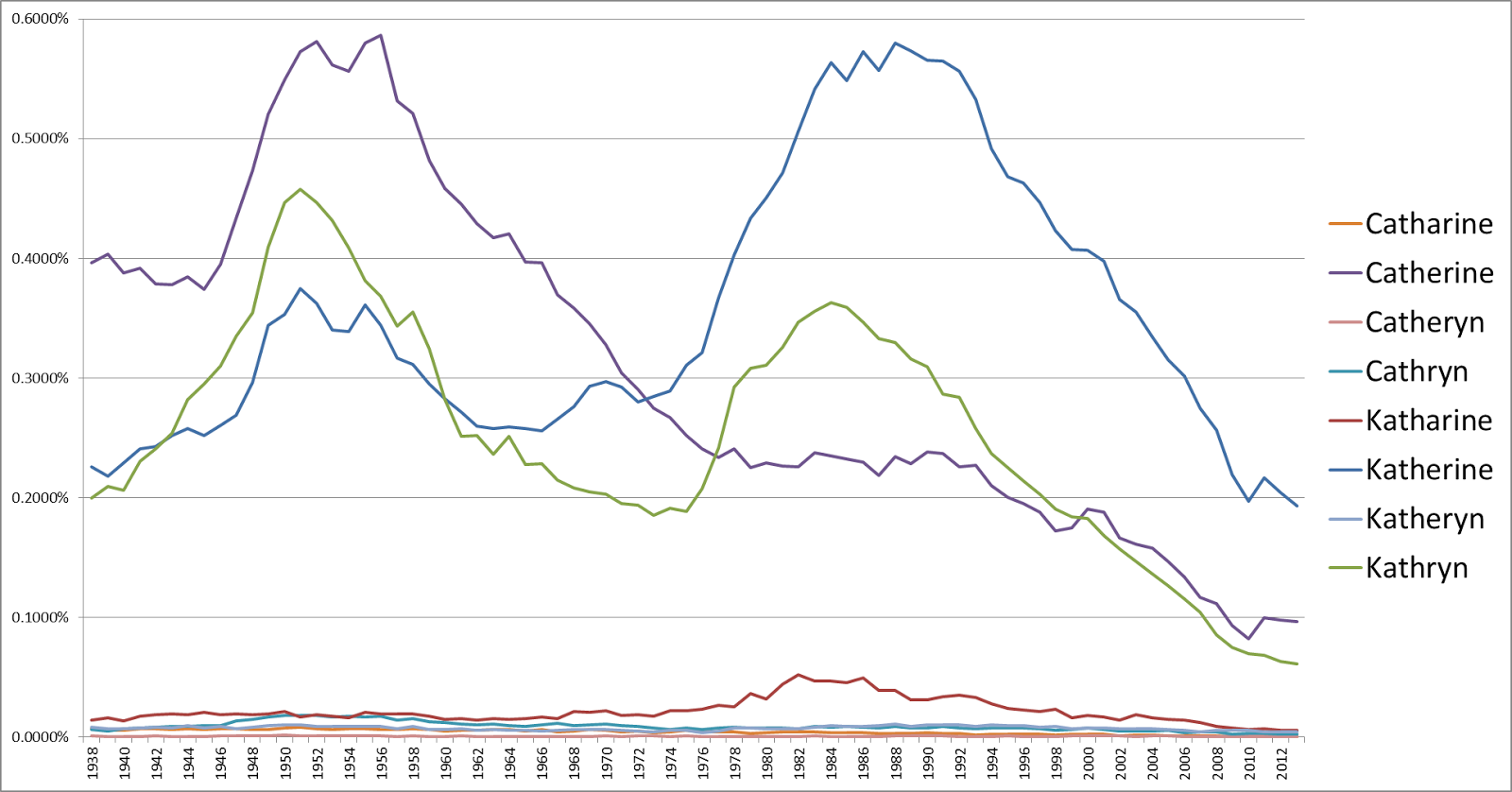 If I only wanted to prove that the Big 3 were and are the dominant spellings over the years, you can see it here. But even more interestingly, you can see where exactly the spelling preference changed from Catherine to Katherine. In 1973, parents made the switch from C to K, which probably goes along with the trends of the time.

Another impressive pattern you can recognize in the graphic are the two humps. In the 1940s and 1950s, there is a swelling of usage for all of the Big 3, with Catherine taking the lead, followed by Kathryn, and then Katherine. The 1960s and 1970s brought a decrease in usage, and then another boom occurred in the 1980s and early 1990s, this time with Katherine taking the lead, followed by Kathryn, and then Catherine, who only seemed to go down from its peak in the 1950s.

To take this observation even further, I present the next graph. Because they are Top 100 names and therefore subjects of my Name-alytics research, I have the percentage of usage data for the Big 3 from 1880 through 1937…

Do you see the slight hump in the 1910s? And Catherine and Katherine may very well be coming down from another hump occurring off-graph prior to 1880. You can also see exactly how popular Catherine was at its peak… 8 out of every 1,000 girls were named Catherine in the mid-1910s. Catherine was more popular at its height than Katherine or Kathryn ever were at theirs.

But let’s move on. Referring back to the first chart, starting in the late 1990s, and continuing currently, you can see the trend is moving away from Katherine, no matter how you spell it. Katherine is still the most popular of the Big 3, but Catherine overtook Kathryn at the turn of the century.

As for the non-Big 3 spellings, the upswing of Katherine and Kathryn in the 1980s helped Katharine have a rise in popularity during that time as well. Katharine still has the highest popularity out of the rest, followed by Katheryn, Cathryn, Catharine, and Catheryn. (There are plenty of other spellings of Katherine that have been used… I just chose to concentrate on these for the purposes of this post.)

So, what does all of this mean? Well, Katherine has shown to be quite a roller-coaster of a name. Making this discovery leads me wonder if the wave will continue and another influx of Katherines will appear in the next decade or so. If so, I wonder which spelling will take control then? What do you think? Will Catherine join the trend towards older favorites and come back into the forefront?

Originally posted at thenamefreak on January 20, 2015 and revised for Nameberry.

NameFreak! on Facebook NameFreak! on Twitter
NameFreak!
Kelli Brady is a stay at home mom of two who needed an outlet for her name obsession. She found it at NameFreak!, a blog dedicated to a wide variety of name-related whims and fancies. You can also follow her on Facebook and Twitter. Her eBook, Name-alytics, is a look at the history of the Top 100 names in the United States. Check it out at https://gumroad.com/l/name-alytics!

View all of NameFreak!'s articles

11 Responses to “The Spellings of Classic Name Katherine”