The Royals are Coming: King, Prince and Princess 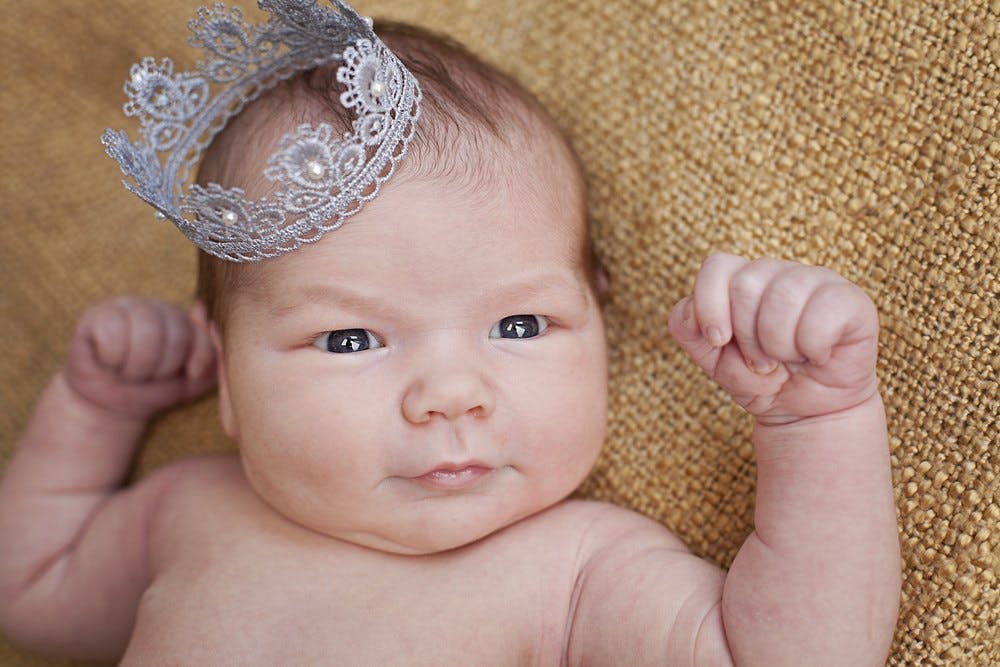 Will and Kate are expecting a prince or princess in 2015, but there could be thousands of royal births in the coming year.

A great many of those identities are clad in purple and ermine – tiny royals, with names to declare they rule.

Celebrity babies are leading the trend.  Lil’ Kim welcomed daughter Royal Reign last June.  At the close of 2014, Kourtney Kardashian and her boyfriend Scott Disick – a self-styled Lord – gave the name Reign to their son.

And let’s not forget the lofty name Pete Wentz chose for his new son: Saint.

Whether your child is truly heir to a kingdom, reality show royalty, or just king of your heart, there are dozens of names that tell the world your baby rules.

King – Just over a dozen men currently answer to the title King as rulers of nations across the globe.  But in the US alone, there were more than 2,000 newborn boys named King in 2013.  That’s not counting another 2,100 called Kingston and 200-plus called Kinglsey.  Sure, we can thank Harry Potter, Jamaica, and Gwen Stefani for those last two, but there’s no doubt – we’re quite fond of this exalted title for our sons.

Prince – Sure, there’s the eccentric musician of Purple Rain fame. But Prince was given to more than 600 newborns in 2013.  That’s not counting preppy Princeton, the name of nearly 400 more boys, a choice that’s part-Ivy League, part-crown.

Messiah – It’s not exactly a royal title, but it is certainly a big name.  A Tennessee judge made headlines by ordering a legal name change for a child on the grounds that there is only one Messiah. But was she ever wrong.  In 2013 alone, there were 965 newborn Messiahs, and over 4,000 in the past decade.

Major – You won’t find many boys named Admiral, but Major is, well, major.  The military title was given to 849 boys in 2013 – a huge increase from 197 in 2011 and 74 in 2001.  Why the sharp rise?  Maybe it’s the high-profile designing Novogratz family.  The youngest of their seven children is Major.  (Older siblings are Wolfgang, Bellamy, Tallulah, Breaker, Five, and Holleder.)

Rex – For decades, Rex was the family pet.  But today it’s the kind of vintage revival name that fits right in with Felix and Max. It’s Latin for king. While the equally regal Roy and Leroy don’t sound quite so grand these days, Rex retains all of his majesty, and yet I’d say Rex is one of the most wearable names on this list.

Duke – Duke is making a comeback, though this name feels more John Wayne that peer of the realm. Bill and Giuliana Rancic named their son Edward Duke in 2012, but call him by his middle.  In 2013, Duke charted at #718 in the US – obscure, but gaining.

Legend – Will naming your child Legend ensure that he’s a future trailblazer?  Legend is just one spot behind Duke on the US popularity charts.

Royal – File Royal with Rex – another part-vintage revival, part-brashly modern choice.  It’s the name of the dad in The Royal Tennenbaums, and Almanzo Wilder’s brother of Little House on the Prairie fame.  Lil’ Kim used it for a girl a few months ago, but the numbers still give this one to the boys.

Titan – At first glance, Titan fits in with Logan, Tristan, Carson, and lots of two-syllable, ends-with-n names for boys. But Titan is so much more. The original Titans were the early Greek gods, succeeded by the Olympians. Today, a titan is still a giant – of industry or some other field of endeavor.  It’s a lot to live up to, but 227 boys born in 2013 will have to try.

Baron – Yet another title, one a little less lofty than Duke or King.  Donald Trump’s youngest son is called Barron, which seems fitting for the real estate mogul.

Noble – This name feels a little more virtuous, a little less extravagant than Royal.  It was given to just over 100 boys in 2013, and it seems to be catching on.

Kaiser – Teen Mom 2’s Jenelle Evans named her son Kaiser, as in the roll and the German title.  Kaiser shortens to the stylish Kai, and also has that fashionable ‘r’ ending.  It’s possible parents could choose this name for sound alone.  But Kaiser is the German form of Caesar.  The title hasn’t been used since the end of the first World War, and yet, anyone who has cracked a history book will recognize Kaiser as a cousin to King.

Knight – In 2013 40 boys were named Knight.  But were their parents inspired by the Dark Knight, Jedi knights, or medieval knights?  Model Jaime King has a son named James Knight.

Saint – A few years ago, Selma Blair named her son Arthur Saint.  In 2014, musician Dave Grohl named his third daughter Ophelia Saint.  And then Pete Wentz went all the way and named his newborn son Saint Lazslo.  Saint isn’t a title you can wear in life – but it might be an on-trend first name on the upswing.

Princess – There’s only one title name currently ranked in the girls’ Top 1000, and that’s Princess.  Unlike many entries on the boys’ list, Princess seems to be fading.  After ranking in the US Top 1000 nearly every year since 1979, this one barely held on in 2013.

Queen – Regal Queen has the most history of any title name for a girl, and had a good run in the 1940s and 50s. Still, over 100 girls were given the name in 2013.  Queenie is another possibility, but Queenie feels more like a swingy, retro sister for Hattie and Winnie than a sceptre-wielding monarch.

Gentry – Gentry comes from the word gentle, as in gentleman. It’s used for boys and girls in almost equal numbers – 104 girls and 91 boys in 2013. Respellings, like Jentry, skew feminine.

Contessa – The Italian form of Countess, this extravagant name could be made more wearable with the friendly nickname Tess.  26 new Contessas were born in 2013.

What do you think of royal names for children?  Are there any that you might consider?  Or are they all over-the-top?