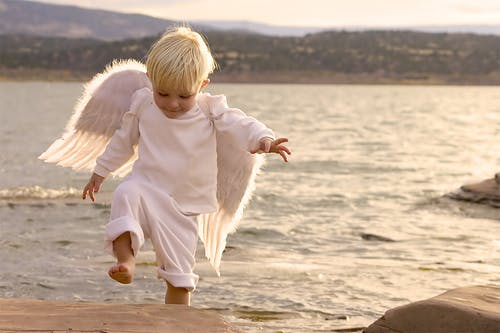 Our new book, The Nameberry Guide to the Best Baby Names for Boys, selects the 600 very best choices from the 20,000 boys’ names on Nameberry.

We wanted to pick the top choices from a wide range of different types of names – classics and new inventions, adventurous and conservative – to help parents zero in on the best of the best.

Today we spotlight ten biblical names included in The Nameberry Guide to the Best Baby Names for Boys.

Abraham was the first of the Old Testament patriarchs and is considered the founding father of the Jewish people. He was originally named Abram, until, according to Genesis, he was told, “No longer shall your name be Abram, but your name shall be Abraham, for I have made you the father of a multitude of nations.”

In the nineteenth century, President Lincoln hung a beard on the name, which kept it from reaching the mass modern popularity of other biblical names like Benjamin and Samuel.

Now that names like Ezekiel and Isaiah are making a comeback, more parents are thinking about a Baby Abie, or—even better—a Baby Bram, to the point where Abraham now ranks at Number 194. And it does, of course, have the noble namesake of Honest Abe to recommend it.

Asher—an excellent, soft and sensitive Old Testament choice—is definitely on the rise, climbing almost one hundred places in the last five years, and a Nameberry biblical favorite. Asher’s ascent is especially amazing given that it took a hundred-year hiatus from the Top 1000, from the 1890s until reappearing in the 1990s. And now Asher is close to breaking into the Top 100.

In the Bible, Asher was one of Jacob’s twelve sons who gave their names to the tribes of Israel.

Oh—and another plus for Asher: the handsome diminutive Ash.

Ezra has a lot going for it: the strength of its heroic biblical legacy, its quirky sound, and its fresh but familiar feel. Ezra is currently growing in popularity with parents seeking a less popular biblical name—it is now at Number 184—its highest ever.

According to the Bible, Ezra led a group of fifteen hundred Israelites out of slavery in Babylon and back to Jerusalem. There is also the poetry connection to Ezra Pound—in addition to young Washington Post blogger Ezra Klein. Ezra Cornell was a founder of Western Union and co-founder of the university that bears his name and Ezra Jack Keats is a popular children’s book author-illustrator.

And let’s not forget the band—Better Than Ezra—or rising actor Ezra Miller.

Gideon is an unjustly neglected Old Testament name—which has just recently started to climb—is an excellent choice for parents looking to move beyond such overused biblicals as Benjamin and Jacob. In the Old Testament, Gideon was a judge called on by God to rescue the Jews from the Midianites, and the name was popular among the Puritans.

Among the celebs who have chosen Gideon for their sons are Neil Patrick Harris and Ziggy Marley.

Isaiah, like brethren Isaac and Elijah, is a once neglected biblical name now firmly back in favor, already surpassing such long-popular Old Testament stalwarts as Aaron and Adam.

The biblical Isaiah, son of Amos, was the most important of the major prophets, with an Old Testament book named for him.

Isaiah has been a star player on the contemporary athletic field, with several prominent basketball and football player namesakes, in addition to a memorable character on Little House on the Prairie, and Grey’s Anatomy actor Isaiah Washington.

Lazarus is a name that looks as if it could possibly be raised from the dead, just like its biblical bearer. Look for it in the next wave of Old Testament revivals that transcend their long-bearded images, the way Noah, Moses, and Abraham have for this generation.

In the Bible, there are two people named Lazarus, the better known being the brother of Mary and Martha of Bethany whom Jesus raised from the dead. There have been also several saints named Lazarus.

Related options are the original Hebrew Eleazar, the Italian and Spanish Lazaro, and the Yiddish form Lazer/Laser, the name of the son in the film The Kids are All Right.

Levi, lighter and more energetic than most biblical names, with its up vowel ending, combines Old Testament gravitas with the casual flair associated with Levi Strauss jeans.

Now being rediscovered in a major way—Levi has shot up to Number 55, its highest yet—especially after receiving a lot of attention as the sons of Matthew McConaughey, Sheryl Crow and Sara Gilbert—and as Bristol Palin’s former beau, Levi Johnston.

In the Old Testament, Levi was the third son of Leah and Jacob, from whom the priestly tribe of Levites descended; in the New Testament, Levi was Matthew’s given name before he became an apostle. In the Thomas Hardy novel Far from the Madding Crowd, Levi Everdene is the father of the heroine. Levon is a related name.

Although Nathan is more popular, the more dignified Nathaniel is firmly in the Top 100 and has been since the 1980s. Despite the profusion of Nat names around, Nathaniel remains singularly appealing and distinctive, with several attractive nicknames—Nat, Natty and Nate. Parents finding it overused might opt for New Testament Apostle Nathaniel’s other name, Bartholomew.

With the prevailing popularity of Samuel, some parents are considering this more (literally) powerful biblical name, which shares the desirable nickname of Sam.

Samson was, of course, the supernaturally strong champion of the Israelites against the Philistines who was betrayed by Delilah, as dramatized in more than one Technicolor epic. But the more it is used for children today, the more the name is able to move away from that image.

Silas is based on Sylvanus, the Roman god of trees and was originally bestowed on people who lived in wooded areas or who worked with wood.

St. Silas was a leading member of the early Christian community who accompanied Paul on his second missionary journey.

Get your copy of The Nameberry Guide to the Best Baby Names for Boys, available now in both ebook and print versions.