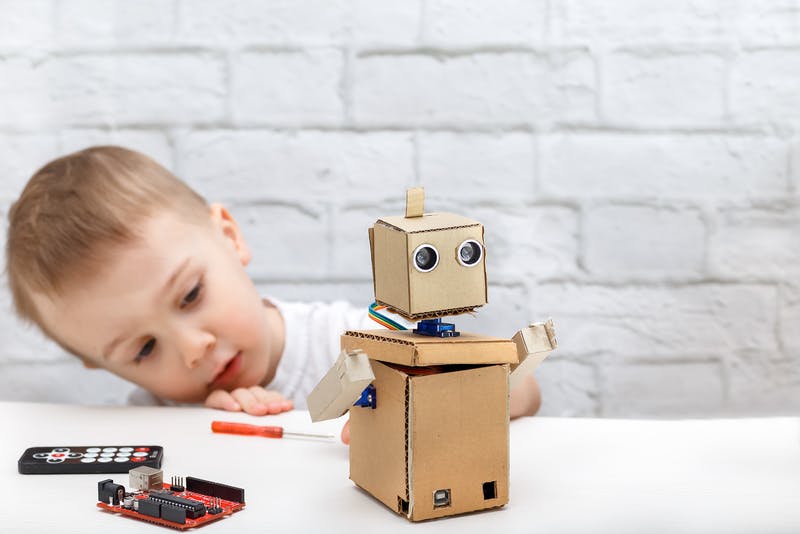 Their love of science fiction and fantasy literature has inspired two great names. Let’s help them choose something with just as much magic for their third child!

We’re expecting our third baby and having a great deal of difficulty picking a name.

We have a literary theme going with our kids: Ender Grey and Lyra Yvaine. We hope to continue the tradition by also naming this one after strong literary figures from science fiction and fantasy.  It’s no secret that we prefer unusual names, and we also want everyone in the family to have a unique first initial.

Our surname is unusual, and starts with an S, so names that end with an ‘s’ or ‘x’ sound don’t work.

Names we’ve considered include: Doyle (family name) Xavier, nickname Dex, but my husband doesn’t like Doyle or Xavier on their own. I love Arietta/Arrietty, but he only likes the nickname Ari. Names I like but he does not: Odette, Maeve, Rue, Taran, Thorin, Gawain. Names he likes, but I’m not on board: Ione, Ryker.

Are there any names that you or the nameberry community can think of that might fit the bill?

Choosing baby names from literature is a great strategy, especially when you’re looking for something outside the mainstream. But it poses a challenge, doesn’t it? Not only do you have to love the name, but the character has to personally resonate with you, too.

Let’s look at your wish list, besides the great name from fantasy or science fiction literature part. Your idea name will:

– Not repeat initials in the family, so C, E, K, and L names are out

There’s another point to consider. Ender and Lyra both make me think of their characters immediately. That’s different from, say, Luke (Skywalker) or Molly (from both Neuromancer and Harry Potter). We all know at least a few Lukes and Mollys, and maybe some of them were named for a book – but it’s not obvious.

On the other hand, Lyra and Ender are tied to their fictional inspirations. This puts them slightly outside the mainstream, even though they fit nicely with current trends. I’m guessing you’d like a third name that hits this sweet spot – different enough to hint at the name’s origins, but still consistent with given names circa 2019.

Atreyu – Is Atreyu too different? The hero of The Neverending Story feels like fitting inspiration for a son. Author Michael Ende invented it for his 1979 novel, explaining that it means “son of all” in the character’s native language. It’s a bold and unusual choice, but it has been given to thousands of boys since the 1980s.

Bastian – If Atreyu is too much, could Bastian work? Bastian Balthasar Bux is the boy who discovers the book containing The Neverending Story, and eventually leaps into the tale. Ender, Lyra, and Bastian sound exactly right to me. One caution: the similar Sebastian is a Top 100 choice.

Duncan – Dune’s Duncan Idaho might make a worthy namesake, and while the name ranks in the US Top 1000, it’s never been terribly common. I don’t immediately associate Duncan with the novels, but with siblings named Ender and Lyra, the theme seems more obvious. The similar-sounding Deckard – as in Do Androids Dream of Electric Sheep? and Bladerunner – might appeal, too.

Finnick – Because you mentioned Rue, I thought about Finnick. We first meet him in the second book of the Hunger Games series, and he becomes a close ally of our hero, Katniss Everdeen. It’s an invented name, but connects to the popular Finn. Ender, Lyra, and Finnick work well together.

Jareth – Okay, Labyrinth is a movie, not a novel. But this Jared–Gareth mash-up has lots of appeal. It was invented for the Goblin King in the 1986 film, played by David Bowie.

Poe – I’m thinking of two Poes with this name. There’s the Star Wars rebel, noble but not exactly literary. And then, of course, there’s Edgar Allan Poe. While his most famous works are Gothic, others can be considered forerunners of science fiction. That makes Poe a worthy brother for Ender and Lyra.

Aeryn – Aeryn, inspired by Farscape, fits with Ender and Lyra nicely. Then again, it’s not literary – Farscape was made for television. And perhaps the spelling would lead to a lifetime of hassle.

Alia – Another Dune-inspired name, borrowed from Paul’s sister, Alia Atreides. It fits in with Ender and Lyra, but with Aaliyah in the Top 100, is it different enough?

Coraline – An obscure old French name, Neil Gaiman discovered it by transposing the letters in Caroline. Now it’s far more familiar, but still far from common. I think that puts it in the same category as Lyra and Ender.

Eowyn – Lots of Lord of the Rings names could work nicely. Besides Eowyn, there’s Arwen, Galadriel, and Elanor, too. It also makes a great middle name option.

River – If you’re willing to consider inspiration from television and movies, River is one of the best. A significant character in both Firefly and Doctor Who, the gentle nature name carries a lot of sci fi significance, too.

For boys, my favorite is Bastian. Though I do think it’s worth seriously considering Doyle Xavier “Dex,” too.

I’m less certain about girls’ names. Alia River is probably my favorite, but I’m not sure if it’s different enough to feel right to your family.

Let’s open this up to the community. What are your favorite literary sci-fi and fantasy names for boys and girls?