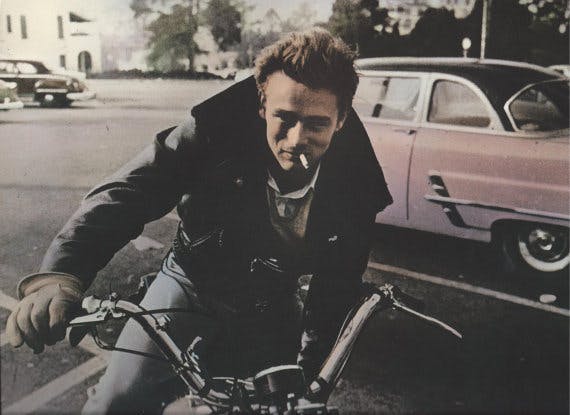 Boy names have inspired me lately. Here are some brilliant names with masculine swagger and a bit of 1960’s charm. If I were to write a novel with beatnik characters, these would be the names of the male characters. In my opinion they embody the motorcycle-riding poet.

These names were loosely inspired by the media portrayal of beatniks from the late 50’s-early 60’s. Beatniks were portrayed young adults who wore black turtlenecks with berets, hung out in coffee shops, recited poetry and expressed anti-establishment sentiments. They were precursors to the hippies.

These weren’t necessarily names of real beatniks or popular baby names in the 60’s, but most have a retro feel and many have artistic or literary associations. These names seem cultured with an edge.

Basil – A rare herbal name for boys, this is also the name of several rulers, generals, and religious figures. The nickname Baz tones down the upper crust feel.

Claude – left the U.S. Top 1000 in 1993, but with its understated French style, and cultural significance (from Monet and Debussy) the name deserves another look.

Emil – The feminine counterpart Emily enjoyed huge success as the top U.S. girl name from the mid-90’s to mid-2000’s, but Emil never became terribly common. Emil stands out (especially when pronounced with the stress on the second syllable) and also earns respect. This name has appeared on athletes, scientists, and writers.

Ernest – Serious (the meaning is “serious”) and literary (from Hemingway) this late nineteenth century favorite is close to slipping out of the top 1000, but has potential to rebound as a vintage great-grandpa name.

Falco – is on the baby name fringe, almost too cool for most to pull off. Falco does not represent everyman but Falco has pizzazz. This was the stage name of the 80’s pop musician known for his hit, Amadeus. Its best real-life potential is as a nickname, one chosen–not by parents at birth–but by pals in middle school.

Julius – Like other mythological names, Julius manages to be simultaneously cutting-edge and established. While most strongly associated with Caesar, Julius is also the name of a few saints and a pope.

Knox – This Scottish surname took off after being chosen by Angelina Jolie and Brad Pitt for their son in 2008. Knox has another Hollywood association as a character, Knox Overstreet, in the classic film, Dead Poets Society.

Leon – Knox Jolie–Pitt’s middle name shares the “lion” meaning with fashion-favorite Leo. The name is transitioning from dated to up-and-coming as it slowly climbs the popularity chart.

Morris – Perhaps remembered as the finicky cat from the 70’s cat food commercials, this medieval form of Maurice feels ready to shed that image. Similar names like Morrison and Morrissey also make hip choices, but somehow Morris feels more effortless than those names.

Rafe – Ben Affleck’s hot-shot character, Rafe McCawley, from the 2001 film Pearl Harbor gives this name a retro feel. Rafe is smart, friendly and, while a familiar nickname in Australia (for Ralph, Rafael and Rafferty), remains under-the-radar in the U.S.

Virgil – is familiar as the ancient Roman poet who wrote the epic poem, Aeneid. While Virgil became a given name among English-speakers in the late nineteenth century, its numbers have gradually fallen. It left the top 1000 in the 1990’s. This is perfect for those seeking an underused name with roots.

Zed – An edgy alternative to Zac. Like Zac, this name has a Biblical long from, Zedekiah. While somewhat familiar, Zed is also underused, only appearing in the Top 1000 once (way back in 1894). Zed may have been the villain in 1990s cult film Pulp Fiction, but Zed is a good guy in my book.

Among expectant parents of boys, there’s a demand for artistic names that are undeniably all-boy. Many of these names haven’t been used much in recent years, but feel ready for a few modern boys.

Angela created Upswing Baby Names to help parents find that different but not too different name. She muses about names on their way in and on their way out in her book, The Top 22 in 2022.  She is also an avid runner, wannabe foodie, and devoted mom of two.

Do you agree with Angela‘s choices?  Any others you think fit the bill?

Angela Mastrodonato created Upswing Baby Names to celebrate names on the upswing. She is a big-time name watcher, and has a growing list of names she watches by tracking their popularity each year. Sign up here to get your copy of this Watch List.

View all of upswingbabynames's articles