Name the Next Beckham Baby 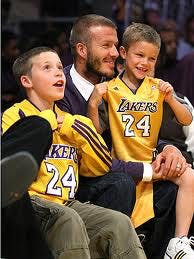 Question of the Week: What should David and Victoria Beckham name their fourth child?

So Posh and Becks are expecting a new member of their team this summer.  They’ve been both imaginative and trendsetting when choosing the names for their three boys: Brooklyn Joseph, Cruz David and Romeo James. Due in some part to their influence, Cruz is now Number 346, Romeo is Number 411, and Brooklyn is 37—but for girls!

Will they again use some reference to place, as they did with Brooklyn (chosen–no–not because that was where he was conceived but where Victoria was when she found out she was pregnant) and Cruz (a Spanish name chosen when Beckham was playing for Real Madrid)?  Doesn’t seem too likely with them now living primarily in Beverly Hills.

One pattern they’re likely to continue is using a classic male name in the middle.

But wait–to quote a line from the musical _Carousel–_what if he is a she?

Any great suggestions for them for either or both sexes?