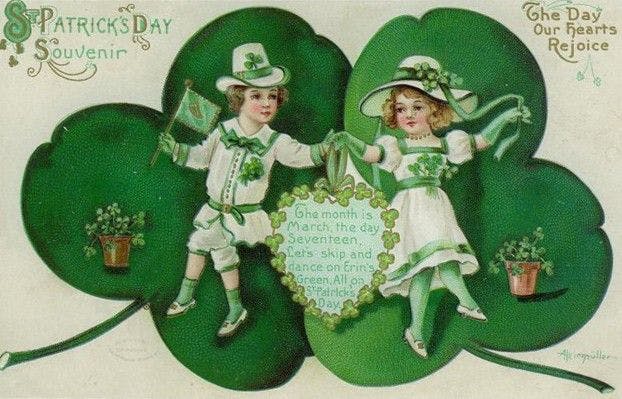 Irish baby names appeal to a wide range of parents, whether your background is Irish or not. But the Irish baby names most popular here are very different from those that are hot in their homeland. St. Paddy‘s Day is the perfect moment to look at the top Irish baby names today.

Irish names have, of course, long been popular in America, brought here by immigrants from the middle of the nineteenth century through the present day.

There have been waves of popular Irish names in the US, starting with such stalwarts as Patrick and Bridget and moving through Kelly and Kevin, Shannon and Sean.

Today, the top Irish baby names are very different in both places from those in the past. Let’s take a look and see how they compare.

Here are the Irish baby name currently in the US. Top 100:

Liam #2 for boys—Thanks partly to Liam Neeson, this traditional Irish nickname for William is now the second most popular boy name in America.

Aiden #13 for boys—Though the Gaelic favorite is traditionally spelled Aidan, this is the version that took off like wildfire here at the beginning of the new millennium, spawning dozens of rhymed cousins.

Riley #35 for girls—Riley entered the girls’ column in 1990 and has been climbing since, while moving in the opposite direction for boys.

Nora , #41 girls—Nora has been a perpetual favorite in the US since records have been published, but has never ranked as high as it does now.

Kennedy #57 girls—a high-ranking Irish-American presidential choice that’s been used much more for girls, it took off in the 90s

Nolan #71 boys—Nolan is another Irish name that has never been more popular in the US than it is now.

Quinn— #97 girls—Young actress Quinn Cummings first showed the feminine potential of this Irish surname, which has been rising since 1979, now used much more for girls than boys.

Reagan— #99 girls—The same is true of this presidential surname, associated with a leader-in-chief who projected a buoyant, cheerful image.

Conor #4—Just one ‘n’ is tops in the Old Country

Liam #15—as seen above, mega-popular both here and there

Cian #18 (KEE-en) As Americans begin to be more familiar with its pronunciation, it could catch on here

Patrick #19—the sainted name of the hour

Finn #33—An international hit du jour, thanks to several celebs and movie and TV shows, and its own ineffable charm

Erin #38—The poetic name for Ireland itself, it’s gone down in popularity n the US.

Tadgh #48 –(TYEg) A popular name meaning poet, it has a long legendary history as a grandson of Finn McCool

FYI—The non-Irish Jack and Emily are the very top names in Ireland, as they have been for several years running.