The Duke and Duchess of Sussex are having a baby! Yep, we’ve all been guessing it wouldn’t take long, and now that it’s confirmed, we can start speculating on the prospective royal baby names.

To Royal or not to Royal?

First there is the question of whether or not the couple will/have to/should use a royal name for their child.

To start with, currently, Harry‘s children will not be entitled automatically to the title HRH (Prince/Princess). Presently, the only people entitled to the HRH hereditary title are: the reigning monarch’s children; a monarch’s sons’ children; and the Prince of Wales‘ eldest grandson.

However, according to this, only Prince George was allowed to be HRH (not Charlotte and Louis). To balance this fairly (especially if he was a girl) just before the Duchess of Cambridge gave birth to her first child, the Queen issued another letters patents to grant all of William’s children the title of prince or princess. As Harry is so close to the succession, I personally believe that the Queen will issue a similar letters patent for his children just before Meghan‘s due date.

This adds a little more weight to the choice of a name. Put Prince or Princess in front, and expectation is that it will be a name with royal precedent or suitable gravitas.

The diagram below shows the distribution of royal/non-royal names amongst the Queen‘s descendants: 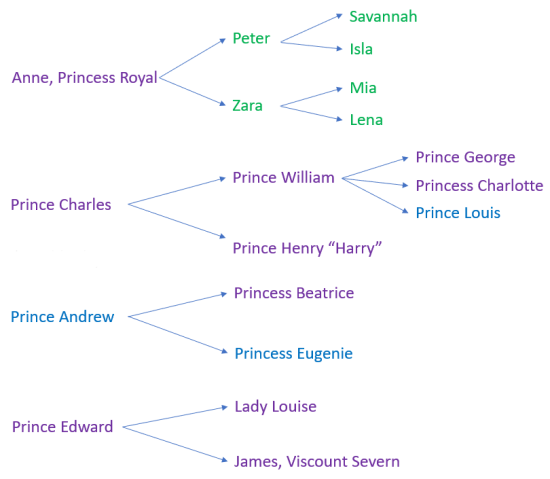 Looking at the diagram, it seems most likely that Harry and Meghan will go for a purple or blue option, especially with the royal title of “Prince(ss)” added, but there is always scope for using a traditional non-royal name.

Secondly, there is the aspect of dual-nationality. Although Meghan is now a British citizen, she is a born and bred American and proud of that fact. With a half-British, half-American heritage, it isn’t unlikely that they will look to a name that has transatlantic appeal.

For example, Albert is perfectly royal and fashionable in England currently, but it’s still heavily dated in the US.

As will most prospective mothers, Meghan will likely be drawn to baby names that don’t clash with her own native popular-culture references and that have equal appeal to American ears as they do to British.

My top choices for Harry and Meghan:

Eleanor gets its royal credentials from being borne by three English queens and several royal princesses in the Middle Ages. It was still borne by Georgian princess as a middle name up until the 19th century.

Eleanor can also be classed as a name of American “royalty” having been borne by the gifted and influential First Lady, Eleanor Roosevelt.  The Duchess of Sussex is a great advocate for women’s empowerment, so I can easily see diplomat and activist Eleanor Roosevelt being an appealing namesake for Meghan‘s daughter.

The name is royal, traditional, popular in both England & Wales and America, and has a worthy namesake. So a tick in many boxes.

Popular in both countries and with a lovely lyrical sound, Isabella works seamlessly on a British-American girl.

Like Eleanor, Isabella was a medieval royal powerhouse with three English queens and several princesses bearing the name. Though it hasn’t been used within the British royal family in a few centuries, it is still currently in use within the other royal houses of Europe.

Traditional, sweet and currently fashionable on both sides of the Atlantic.

Amelia is also royal thanks to a few Georgian princesses bearing the name. This not only makes it regal, but puts it in fairly recent use in the British royal family.

Added to this, Amelia Earhart gives the name not only an inspirational female namesake — she has been described as the ultimate feminist icon — but also adds a traditional American-heritage side to the name.

A perennial classic in both countries, Elizabeth is impeccably royal with plenty of nicknames to fall back on. The only downside is that many of the granddaughters (Zara, Beatrice, Louise) and great-granddaughters (Isla, Charlotte, Lena) of the Queen have Elizabeth as a middle name already, which may make it perfect middle name material for Harry and Meghan, but could make it feel too overused in the family to choose as a first name.

It’s hard to get more queenly than Victoria — its British royal credentials are undeniable!

Victoria is moderately common in England but more popular among Meghan‘s countrymen so it works well in either country.

Another bonus? Victoria is similar in sound to Doria, Meghan‘s mum’s name. Perhaps Victoria could be used as a way to subtly honour Grandma Doria?

Margaret is a strong name with gravitas and backbone. Not only does it have several queenly namesakes — and powerful, go-getting ones at that! — Margaret also has many many other notable female namesakes including Americans Margaret Fuller and Margaret Cleaves.

Since the Queen‘s sister was named Princess Margaret, it has a lot of recent royal precedent.

Margaret is also the mother-form of the name Meghan, so it would be a great way for mother and daughter to share a name.

Margaret is rising in the US as a fashionable traditional. It is less popular in Britain but a cute nickname would easily “British” it up: Maisie, Maggie, Molly…. After all, Harry is officially Henry, so why not a Princess Margaret “Maisie“?

Already a firm Top 20 favourite in England and Wales, and swiftly rising in the US Top 100, Alice is a sweet medieval gem-turned-Victorian sweetheart with plenty of royal credentials.

One Princess Alice (Queen Victoria’s daughter) was a champion of women’s causes and nursing — managing field hospitals herself during the Austro-Prussian War. Her granddaughter, Princess Alice of Battenberg, also devoted herself to charity, organised shelters for orphans, worked in soup kitchens and sheltered Jewish refugees during WWII.

Not only were both of these Princess Alices highly admirable — and reflect Meghan‘s own longstanding passion for charity work — the latter was Prince Philip’s mother, and therefore Harry‘s great-grandmother.

Popular on both sides of the Atlantic, and with royal heritage to boot. Britain nearly had her own “Queen Sophia I” with heir to the throne, Electress Sophia of Hanover. Sadly, she died weeks before she would have become queen in 1714,  making way for her son George I. Princesses with the first or middle name Sophia followed soon after her.

The only possible drawback is the similarity to the name of Sophie, Countess of Wessex (Prince Edward‘s wife).

Adelaide has slightly more American appeal than British at the moment, but it does count as an overlooked royal name (a blue colour in the diagram above). It is rising in England and Wales, and already on an upward pTH since it rejoined the US Top 1000 in 2005. This makes it a fashion-forward option for the Sussexes to use.

Queen Adelaide was the wife of King William IV and Adelaide was used for Queen Victoria‘s eldest daughter as a middle to honour her.

Like Adelaide, Caroline has much more US appeal than it does in the UK., where it is still a little dated: it left the E&W Top 100 in 1984. However, for Meghan it will feel more like a perennial classic.

Two Georgian queens and three princesses bore the name Caroline so it has perfect royal cred.

Already a steady favourite in England — especially amongst the upper classes — Matilda has both medieval gravitas and Victorian quaintness. It is less popular in the US, but has seen a resurgence since it reentered the Top 1000 in 2008.

A medieval powerhouse, Matilda was a strong favourite among medieval English and Scottish queens – England even had its very own ruling Queen Matilda for a while. Though it hasn’t been used as a royal first name since the Middle Ages, it has been used as a royal middle name for Georgian princesses.

Dorothea can’t count as popular, and it is only a little royal (there have been a handful of German and Austrian princesses with the name). So why have I included it?

1. Dorothea would be a neat, yet subtle, way of honouring both grandmother Doria and Diana (both D___a names), whilst still being royal.

2. The nickname Thea is stylish and fashion-forward in both the UK (#53) and the US (#269).
As Harry always goes exclusively as “Prince Harry,” even though Henry is his legal name, there’s no reason why it couldn’t be Princess Thea.

A traditional staple fashionable on both sides of the Pond. Aside from the great Macedonian king, there have been several Kings of Scotland with the name, as well as being chosen by King Edward VII for his youngest son, so it is perfectly royal.

Sure, it’s Prince George‘s middle name, but as little brother Louis has his other middle name, no one can complain if Harry and Meghan repeat.

The bookmakers are still convinced that their top choice for William and Catherine is a sure bet for Harry and Meghan as well. And it makes sense. Arthur is the highest ranking royal male name in England that isn’t currently “in use” as a first name in the immediate royal family.

In the US, it is nowhere near as popular, but it is on a steady rise.

A traditional favourite in both America and Britain and perfectly royal. Charles is the name of Harry‘s dad, which may make it a little close. However, if Harry can be “Henry exclusively known as Harry,” then perhaps Prince “Charles but call me Charlie” would work.

A name of Scottish kings, Robert is classic and royal. It is in a bit of a slump in England at the moment, though perky nickname Bobby is up at #65, which gives the names more options.

Theodore is not a (British) royal choice, though there have been a few early Russian princes and a brief Corsican king with the name. It is, however, a perennial classic with bags of charm and grounded in history.

Added to this, Theodore is fashion forward and rising on both sides of the Pond.

What girl and what boy name do you predict?

View all of Elea's articles

You can skip to the end and leave a response. Pinging is currently not allowed.