What Took So Long?: Why Huck and Holden and Atticus now? 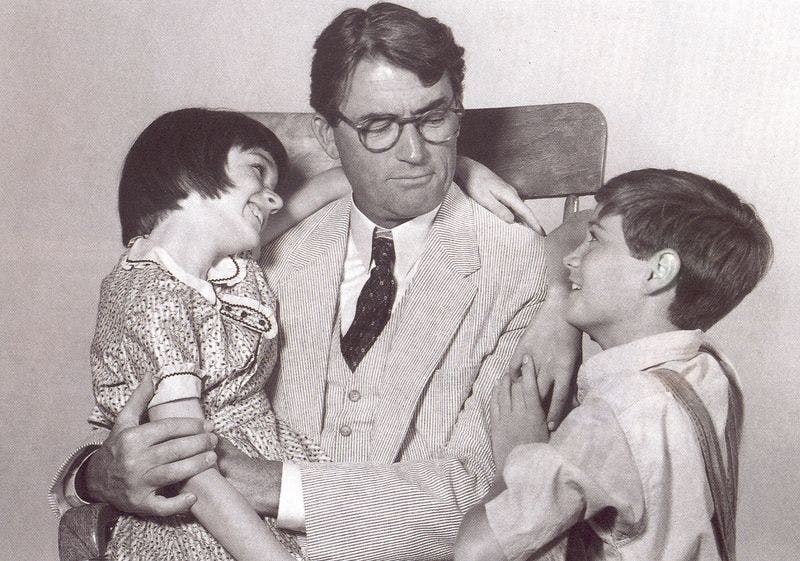 It always strikes me as somewhat curious when a name that has been hidden in plain sight for decades—or longer—attached to a significant literary or real life character will suddenly pop into the zeitgeist and take off.  Sometimes the contributing factors are obvious—sharing with a more recent celebrity (looking at you, Ms Johansson) or its discovery by the parents of a starbaby.  And sometimes, it just remains a mystery.

Atticus. The Harper Lee novel To Kill a Mockingbird was published in 1960, and the movie, starring Gregory Peck as principled lawyer and role-model dad Atticus Finch, was released two years later. Between then and now, the book has been a mainstay of English class curricula, working its way into the collective consciousness of future baby namers, while Atticus Finch was voted the greatest hero of American film by the AFI.

But why Atticus now?  There were five baby boys bearing this Latin appellation in 1881, but the name lay fallow for well over a century when it suddenly popped up in the Top 1000 in 2004, jumping 500 additional places since then.  There was definite celeb influence—Mary–Louise Parker and Billy Cruddup chose it in 2004 and Summer Phoenix and Casey Affleck in 2007, but I think it was more the confluence of a growing trend for ancient Greek and Roman names (itself influenced by recent movies and TV shows) and the golden aura still surrounding Atticus Finch.

Beckett. The name Beckett has two primary associations: the martyred saint Thomas à Becket—the subject of a popular play and 1964 movie starring Richard Burton and Peter O’Toole–and Irish writer Samuel Beckett, neither of whom can account for its suddenly arrival on the popularity list in 2006.

So why Beckett now? In this case, there’s definitely been a building celebrity momentum.  Melissa Etheridge led the way in 1998, followed by almost a dozen others, including several with Irish backgrounds who might indeed have been inspired by the Nobel prize-winning playwright and novelist—Malcolm McDowell (his other sons are Finnian and Seamus), Conan O’Brien, Nicole Sullivan and Pierce Brosnan—who named his first son Dylan Thomas.

Dashiell. Iconic hard-boiled fiction writer Dashiell Hammett (1894-1961), creator of Sam Spade and Nick and Nora Charles, was born Samuel (hmmm) Dashiell, and chose to use his distinctive middle—which was his mother’s maiden name—as his nom de plume, though he had been called Dash by friends even before he started writing.

Fans of his fiction discovered his name early on—both Alice Cooper and Harry Anderson used it for their sons in 1985, but it was Cate Blanchett’s choice of it in 2001 that really put it on the map; just last year both Autumn Reeser and Harvey Weinstein followed suit. The adorable nickname Dash is surely another factor (Kardashian influence?)—and its mainstream appeal was verified by its use for the leading little boy character, Dashiell ‘Dash’ Parr in Pixar’s 2004 The Incredibles. Dashiell hasn’t entered the Top 1000, but his arrival feels inevitable.

Holden. Catcher in the Rye, featuring iconic rebel Holden Caulfield, came out in 1951; add at least 12 to 15 years for when many people starting reading it as teens, bringing us to the mid-sixties and beyond, and then another decade for those folks to start thinking about baby names, and we’re edging close to when the name landed on the list—1987.

Add to that the not insignificant factor of soap opera (ATWT) character Holden Snyder , who debuted in 1985 and hung in on the show for the next 25 years. And then in one of Ben Affleck’s breakthrough flicks, Chasing Amy, 1997,  he was a Holden, as would be Jake Gyllenhaal and Bradley Cooper, solidifying it as a swoon-worthy-guy name. Factor in some celeb parents (Rick Schroder, Eric Mc Cormack, Brendan Fraser, James Marsden, Mira Sorvino), and we shouldn’t be surprised that Holden jumped from being given to just over a hundred boys in its 1987 debut year, to more than a thousand last year.

Huckleberry. When Kimberly Williams and Brad Paisley named their son William Huckleberry in 2007 and announced that they were going to call him Huck, it was immediately slotted into the Strange Fruit category.  This name that Mark Twain coined for his eponymous novel in 1884 has pretty rapidly shed its outré status.  It hasn’t entered the SS list yet, but it’s gotten lots of love on Nameberry. Adventurous Bear Grylls used it as the first name of his third son (brother of Marmaduke), it’s been a child character on The West Wing and an adult on Scandal, pulling it further in the mainstream.

Just a thought: Could its attachment to the popular name Finn be a factor?

Lincoln. Lincoln is clearly no flash in the pan.  Many children have been named for Honest Abe since his presidency, and it has been off the popularity list only once (1884) since records have been tallied.  But why has it shot up close to 500 places in the past decade, to now be at its highest standing ever, at Number 132?

Yes, this is a time when we are hungry for heroes, especially those of the honest persuasion, but beyond that, I think we can point to the Lincolnmania sparked by first Doris Kearns Goodwin’s 2005 book, Team of Rivals and then set in higher gear by the movie based on it, Steven Spielberg’s Lincoln, in which Daniel Day Lewis seemed to become Lincoln, humanizing the granite figure.  There were 2,882 little boys named Lincoln in 2012; then, when Kristen Bell and Dax Shepard gender-bent it for their daughter last year, its absolutely modernity was affirmed.

Scarlett. Why did Scarlett enter the Top 500 69 years after the appearance of Scarlett O’Hara in the bestselling book Gone With the Wind? Simple two-word answer: Scarlett Johansson.  The name of the Margaret Mitchell heroine was actually planned to be Pansy and changed at the last minute to Scarlett—the maiden name of her character’s grandmother: her full name was Katie Scarlett O’Hara, after the author submitted about a hundred different possibilities to her publisher.

As huge as the success of both the book and the 1939 blockbuster movie were, the name didn’t resonate much with the public (too ‘scarlet lady, perhaps?), appearing at the bottom of the list for just a couple of years in the sixties, then again in 1992.

Scarlett Johansson–whose mother is a self-proclaimed movie buff and no doubt GWTW fan– had her screen debut in the mid-nineties, but made her most conspicuous impact as an adult in Girl With a Pearl Earring in 2003, when the name started its climb, until it’s now at Number 61.  (Credit must be given for their prescience to Jerry Hall and Mick Jagger for naming their daughter Elizabeth Scarlett in 1984.)

Others in this category to consider: Wolfgang (as in Amadeus Mozart) and Zane (as in Zane Gray, born Pearl, Zane being his mother’s maiden name.)