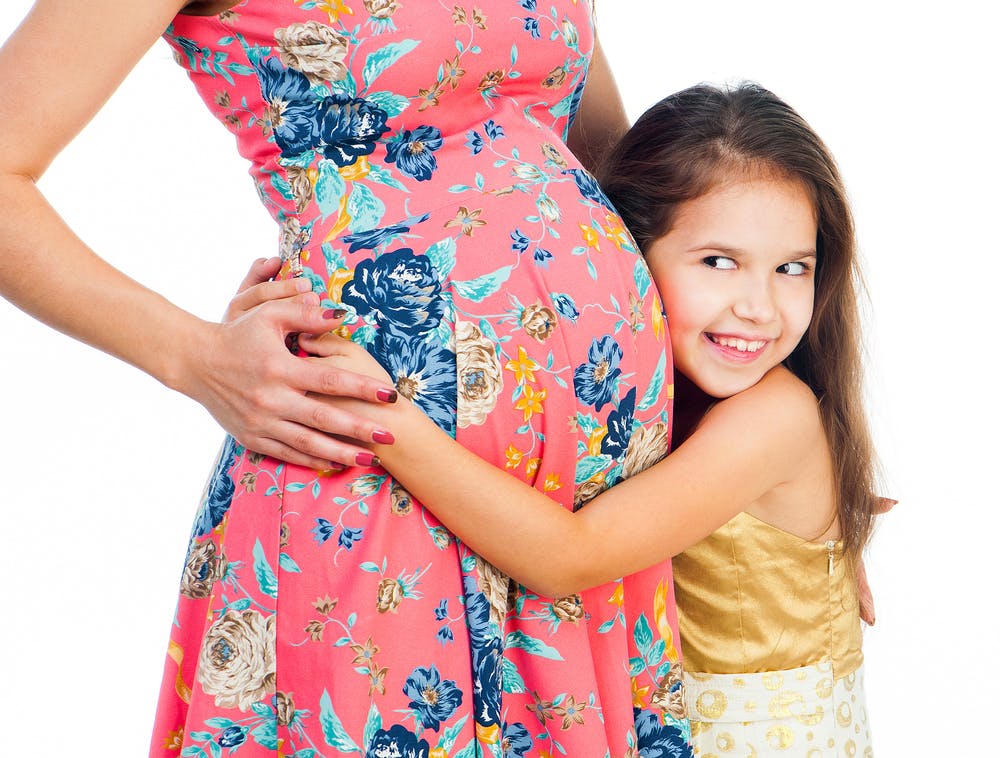 My husband and I have decided not to find out the sex of our baby. We’re excited about the surprise, but are struggling to pick out both a boy and a girl name.

Our daughter is Leena Gray. We picked Leena because it is familiar to my husband’s Indian family but still accessible to mine, it has some global recognition, and it fit our criteria of being recognizable but not common.

Her middle was going to be Elizabeth (a family name), but a couple months before she was born we decided on Gray instead, after my dad Gary. I’m really glad we did, as I love the juxtaposition between the more traditional and unexpected names. I also really like the family connection. I was named after my great grandmother and have always appreciated having a story behind my name selection.

For the next baby, our criteria are the same, but we’re not necessarily committed to an Indian name.

Despite all that, my favorite right now for a girl is Violet (which my husband is not a fan of). His favorite is Ivy – I’m not sure where the botanical connection is coming from – which I like, but just doesn’t feel quite like “the name”. Perhaps with the right middle or as a middle? I’m also a fan of the Elizabeth nicknames Elsa and Elsie, but worried that they’re too popular after Frozen and that they’re too close to Leena.

For a boy, we’re completely lost. I have some interest in Ezra or Milo, but hubby’s not biting. I feel like it’s harder to find the sweet spot of relatable but not too popular boy names. Maybe this is where we need to dig in deeper to Indian names?

As far as middles for girls from my side, Elizabeth is a family name. My sister is Emily and my sister-in-law is Amelia, so I also like the idea of Amelie or Emilia or some sort of combination, and it’s a bit more unexpected, like Gray.

For boy middles, from my brothers we have Matthew, Michael, James, and John. Also my mom is Dana and has suggested that Daniel would be a great name for a boy.

We’d appreciate any advice you can give. I’m seriously ready to open the envelope to find out if it’s a girl or a boy just to narrow our choices!

Cross-cultural baby naming can be a challenge. No matter which two (or more!) languages you’re working with, it sometimes feels like the pool of possible names is limited.

That said, I think you’re taking the right approach. A name that is accessible in more than one culture is a good thing in our global age, and it gives you more options than focusing only on Indian names that seem familiar in English.

It also seems like you both favor names that are short, sweet, and complete. Leena, Ezra, Milo, Violet, and Ivy are all names with a lot of style, but no extra frills. They’re not nicknames for longer names, and they’re not the kinds of names that invite nicknaming.

But I do wonder if you’re gravitating towards names that are a little more popular than you might ultimately like? Violet is currently in the US Top 100, and Ivy isn’t far behind. Ezra ranked Number 119 last year. Your daughter’s name is very different, and even the more familiar Lena only ranked in the upper 200s.

Many of the logical crossover name possibilities, like Aria, Maya, and Layla, are also in the US Top 100. They’re great options for families looking for culture-spanning names. But I don’t think they’re distinctive enough to pair with Leena.

Instead, would you consider one of these names for a daughter?

Anika – Anika means splendor in Sanskrit, but it also occurs in several European languages as form of Anna. A name that works in Munich or Mumbai seems like a win! In terms of popularity, Anika hovers in the 500s, as does alternate spelling Annika. Singer Anika Noni Rose voiced Tiana in The Princess and the Frog, and there’s an Anika on Fox’s smash hit television series Empire. Yet this name remains nicely under-the-radar.

Viveka – I noticed that both of your favorite names share the letter V, so I wonder if a V name might please you both. Viveka is another crossover with similar roots to Anika. It’s either the Swedish form of a German name, or could come from the Sanskrit for wisdom. Other V names that might be possibilities: Vera, Veda, Viva, Vivian, and Vale.

Zara, Zora – Like Leena, Zara and Zora are names with several possible origins. They’re tough to pin down, and that gives them a pan-global, modern feel. The Z sound is distinctive, just like the V of Violet and Ivy.

Priya – So far I’ve avoided names that seem like true heritage choices, but I think Priya deserves a closer look. With names like Penelope, Piper, and Paisley so popular, the letter P has great potential. While it’s rarely used for girls born in the US, I think it would be easily recognized as a given name.

Mira – Mira has roots in Slavic and Sanskrit, and brings to mind words like miracle and admire, as well as names like Shakespeare’s Miranda and the French Mireille. I can imagine Leena and Mira in nineteenth century New York or many centuries in the future.

Yasmin – You’ve mentioned a concern that a second daughter’s name shouldn’t sound too much like Leena. And yet, it does seem like many of the best choices share Leena’s ‘a’ ending. That’s when Yasmin came to mind. It’s every bit as botanical as Ivy and Violet, and with a distinctive sound. Jasmine is a Disney princess, but Yasmin is a culture-spanning import.

Much to my surprise, I found boys’ names easier! A few that I think would work beautifully:

Dev – It’s a common name element in many Indian men’s names, and I saw Devan suggested as an Indian-American crossover possibility. But Dev fits right in with short names like Jack and Max. And because it’s so short, it has plenty of possible origins. Besides Sanskrit roots, it’s easy to imagine Dev as a form of surname like the English Devon or the French Devereaux, too.

Kiran – I think parents avoided Kiran for years because Karen was so popular for girls. But now that the average Karen is a grandmother, Kiran deserves a moment in the sun. While Kiran has Sanskrit roots, Ciaran or Kieran is Irish, and Keir takes us to Scotland.

Nico – One of the names on every Indian-American baby name list is Nikhil, presumably because it shortens to Nick, just like former Top Ten name Nicholas. But there’s also Nico, a name that reminds me of Milo, but might appeal to your husband.

Rowan, Rohan, Roan – Choose your spelling! Rowan is an Irish surname and a tree, too. It’s the most popular form of the name, at Number 412 for boys in 2014. (It’s also used for girls.) Rohan brings to mind The Lord of the Rings, but ultimately comes from Sanskrit, where it means ascending. At Number 633 in the US, it’s rarer than Rowan, but used exclusively for boys. Roan is a true rarity, but another possibility.

Kai – Kai has roots in Scandinavia and Hawaii, and it’s a used as a name in German and Dutch, too. Add in Cai and it’s also Welsh. It’s not used in India as far as I can tell, but it doesn’t seem incompatible with Indian given names for boys. At Number 177, it’s the most popular name that I’ve suggested. But I do think there’s something distinctive about Kai.

Aran – Let’s end with a name that has roots in Sanskrit, Hebrew, and Irish. The Aran Islands are off the coast of Ireland, and there’s an Aran River in France. It’s a place name in Iran and Azerbaijan, too. The name appears in the Book of Genesis – it’s distinct from the more popular Aaron. Quite the globe-trotting name, isn’t it?

I’m having a hard time choosing a favorite!

Elizabeth works with any of the possibilities as a middle name. One thought: since you have loved ones with Em– and Am- names, you could smoosh them together and use Embeth, as in actress Embeth Davidtz. Zora Embeth, Yasmin Embeth, Anika Embeth.

Or maybe Lily? Lily is a botanical name, but it was once used as a diminutive for Elizabeth. Zara Lily, Viveka Lily, Mira Lily.

When I see them all written out like that, I’m drawn to Anika Embeth. Leena and Anika both hit the right note of familiar, but not overly common, and they honor both sides of your children’s heritage.

For boys’ names, I’ll admit that I’m drawn to Aran. Leena and Aran both seem like names that are familiar, but with a twist. Any of the possible middles on your list would work beautifully, but I do find myself drawn to the sound of Aran Daniel. (Grandmothers are so persuasive!)

Readers, I would love to hear your suggestions for Leena Gray’s sister or brother, and it would be especially helpful to hear if you’ve named children across cultures!